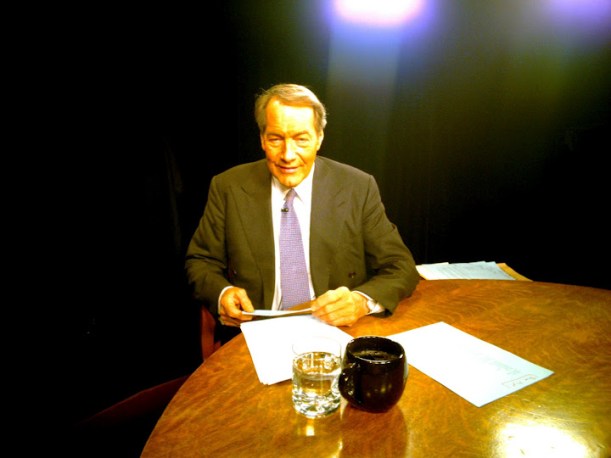 The above picture shows us exactly what it’s like to be grilled by famed interviewer Charlie Rose. It was taken with Google’s Project Glass headset by Sebastian Thrun, the man spearheading Google’s next-gen innovations at Google X, during his interview with Rose on Wednesday.

The picture isn’t framed that well, and it’s not the best quality, but it shows us how Project Glass can instantly help us share experiences with friends. As you can see early in the interview, Thrun doesn’t even break conversation to take the picture: he simply taps a button on the headset, focuses on Rose, and shares it with his Google+ circles using a few simple head gestures. That’s certainly more fluid than whipping out your phone, unlocking it, loading a camera app, snapping a picture, and then sharing it to your friends (which may involve using several apps).

“The hope [with Project Glass] is to get things out of your life, not into your life,” Thrun told Rose.

But while it may be nice for taking pictures, Google apparently is still figuring out the best uses for the futuristic glasses. Thrun mentioned that he hasn’t really seen a compelling augmented reality use-case for Project Glass, and he went on to say that sharing is currently the most useful feature.

Unfortunately, Thrun didn’t divulge much else about Project Glass in the interview, but he did cover some of his other projects, like Google’s self-driving cars, and his education startup Udacity. If anything, it’s clear from the Rose interview that Thrun is a busy man, as every one of his projects is trying to disrupt established industries.

Via The Verge; Photo Sebastian Thrun/Google+