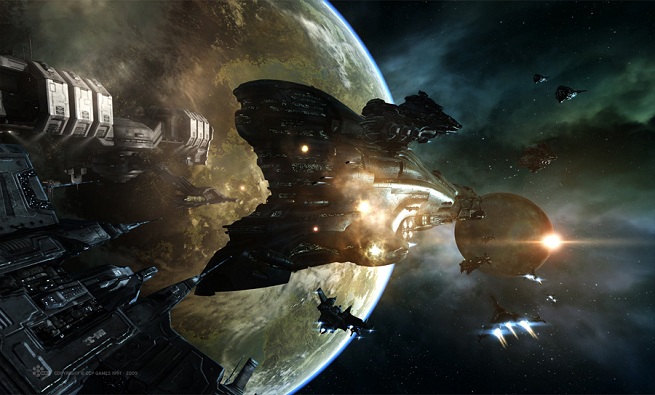 If you’re thinking of jumping into massively multiplayer space sandbox Eve Online anytime soon, you might want to postpone those plans. A gargantuan player-driven raid on the game’s largest trading post kicks off today, and developer CCP Games is stepping aside.

Alexander “The Mittani” Gianturco, a former member of the Council of Stellar Management (a player-elected council liaison to CCP), recently received a 30-day ban for goading a suicidal player during last month’s Eve Online FanFest convention in Reykjavik, Iceland. That ban lifts today, and Gianturco’s celebration involves a fleet of over 14,000 ships invading the Jita trading hub, essentially the beating heart of Eve’s player-run economy.

“I tell you what, it’s going to be fucking brilliant,” Eve Online Senior Producer Jon Lander told Eurogamer. “Absolutely brilliant. They’re going to do exactly what you’re able to do in the game, and people will have to roll with it. It’ll be great.”

Lander’s thoughts echo CCP’s hands-off approach with Eve, preferring its players drive the game’s direction through emergent gameplay and large, galaxy-changing actions. In 2005, members of the Guiding Hand Social Club orchestrated the biggest heist in Eve’s history after slowly infiltrating the ranks of a rival corporation (guild) and stealing the entirety of its resources in one fell swoop. One year later, a sole scammer named “Cally” made off with over 750 billion isk (Eve’s currency) through a banking Ponzi scheme, the largest profit from a scam in Eve to date.

With Gianturco’s imminent blockade of Jita, CCP can’t help expressing its excitement over witnessing another successful example of its relaxed stance of in-game control.

“It’s what makes Eve a really good game,” lead game designer Kristoffer Touborg said. “Do you want to play a 15-minute Call of Duty match you won’t remember the next day, or do you want to spend four months manufacturing 14,000 ships to do this? It’s just so big and awesome.”