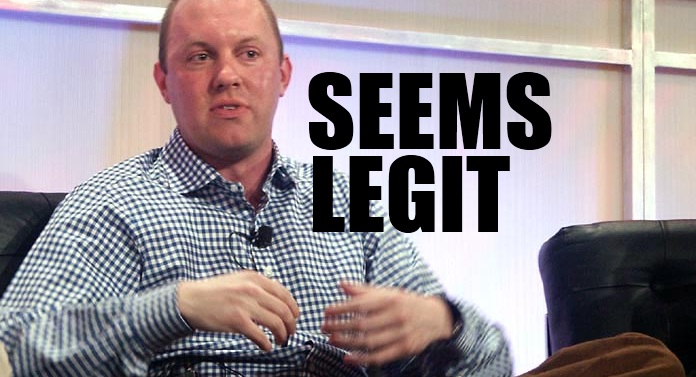 “I don’t think we are in a bubble,” said mega-VC Marc Andreessen onstage today during a Wired conference on business.

Well, no duh — of course a venture capitalist whose livelihood depends on perpetuating tech froth is going to say there’s no bubble. Taking that statement as fact is like listening to a car salesman telling you fossil fuels aren’t bad for the environment.

Look at the zeitgeisten: A mobile app sells for $1 billion after a paranoia-fueled bidding war. Valuations for apps with no discernible purpose are greater than the GDP of a lot of countries. Startups raise money, get bought, and go public at breakneck speeds, all with headline-making and record-breaking numbers in the hundreds of millions of dollars.

Of course, “bubble” itself is a rather nebulous term and difficult to define. Let’s turn to the data for a moment.

Web and software companies, enterprise IT companies, mobile companies — these startups are the ones raising the lion’s share of funding, even during general market downturns. Here’s a look at the number of venture capital deals that took place between 2007 and 2011 over all industries and sectors. 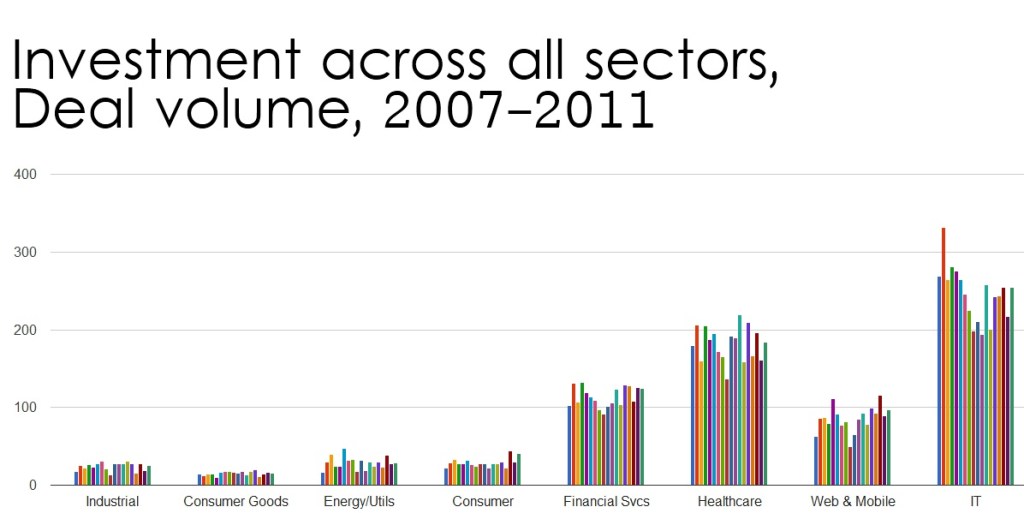 What we see here is investors are putting vast amounts of time and energy into a small subsection of startups: web apps, mobile apps, and other software companies. Investors seem to feel that web and mobile apps are far and away the most important consumer-facing products available, and they’re more interested in enterprise software than they are in healthcare and biotech.

When it comes to the amount of money invested (as opposed to deal volume), web and mobile software companies get more love from investors than hardware startups, semiconductor companies, even biopharmaceuticals.

Outside the tech sphere, VCs in general have had a tough time raising funds, especially for earlier-stage funds (i.e., the riskier side of investment). And 2011 saw a slump in exits overall, meaning the VCs weren’t making their money back as expected, either.

And while most investors in an anonymized survey said they were more confident at the beginning of 2012 than they had been for most of 2011, investor confidence (in offstage environments, at least) is still not back up to its pre-2008 crash levels.

However, what happens in the relatively insulated boardrooms of venture capital is a far cry from what happens in the fast-paced world of the public market. When we’ve seen little hiccups in the general market, newer tech stocks have taken some of the hardest hits.

For example, April was kind of a rough month for the economy in general, with most economic indicators dropping 1-5 percentage points. However, newly public tech stocks, such as Zynga and Groupon, lost 15-30 percent during the same period. These stocks are quick to lose value because — get ready to clutch your pearls — their value was highly overestimated in the first place.

As the market works its mysterious magic, these types of securities might eventually find their correct price at the bottom of a barrel. WHat we’re seeing with GRPN and ZNGA might be a speedbump in a still-accelerating hype cycle. Or it might be the beginning of the end. Time will tell.

Six months ago, an anonymous investor said in a report on investor confidence, “2011 will be remembered as the year that everyone went nuts and overpaid — $1B is the new $100M valuation. For most, this will end in tears.”

That investor was only partially wrong — the dizzying heights of 2011 have spilled over into 2012, but for many, we’re sure this will still end in tears. Regardless of what any VC in Silicon Valley is willing to tell you, the bubble will eventually slowly deflate (if we’re lucky) or burst altogether (if we’re not).

All charts created by the author.