A story that comes from current headlines and experts

By moving into the future, Treyarch’s game designers have a chance to be a lot more creative. And after eight previous installments of Call of Duty, that’s what gamers want.

But the ethos on the design team was to create a scenario for a global crisis that was entirely plausible. The team includes experts such as screenwriter David Goyer, retired U.S. Marine Corps Lt. Col. Oliver North, and robot warfare author Peter Singer, who wrote Wired for War: The Robotics Revolution and Conflict in the 21st Century. Hank Keirsey, a military advisor for past Call of Duty games and a former Ranger, also offered advice.

North, who was the intelligence officer caught up in the Iran-Contra affair, briefed the design team on covert operations. He talked about real missions where he had fake passports and was making deals in hotel rooms with third-world dictators. He talked about making illicit cash drops and other secret missions.

Singer, now a senior fellow at The Brookings Institute, a think tank in Washington, D.C., briefed the team on drones, robots, and the future of warfare. He said that everybody would be fighting in the future over rare earth elements.

“We create fictions, but then set them in the real world where you brush with real historical figures,” Lamia said. “Singer really showed us that we were only scratching the surface of what we should be thinking about in the future. After listening to him, we have never been able to look at the world the same way again.”

The future, of course, has cool weapons. Among this awesome arsenal are a currently experimental microwave heat-ray gun and a self-guiding bullet. All of these weapons are in development. With the scenes set in the 1980s, you get to see the weapons of the old days, and then you can see how they compare to the weapons that change war in the future. He showed them just how lethal battles would become.

Another weapon is the quad-rotor drone with an on-board camera. Such drones already exist, and they’re becoming a bigger part of America’s military muscle. The Central Intelligence Agency has waged a secret “drone war” against Al Qaeda operatives in Pakistan and other countries. Wayward UAVs are also in the news: pilot error may have led to a drone falling into the hands of Iran.

Drones are even being integrated into civilian air operations. Ground-based robots are also an increasingly significant part of the military’s future, according to Singer. With all the news about Anonymous and hacking, it’s entirely plausible that a terrorist could launch a cyber attack that takes over a fleet of robots.

In the near future, the designers also extrapolated about the continued growth of China’s military might. 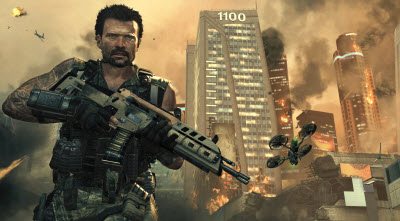 In the first game, there were memorable characters such as Viktor Reznov, the hero of the Soviet Union. The fate of these characters is ambiguous. Anthony said, “Reznov is a figment of your imagination, or is he?” That’s a reference to the fact that Alex Mason, the American hero of the first game, may have entirely imagined his helpful Russian sidekick.

In the first Black Ops, Anthony approached Goyer, a Hollywood screenwriter who wrote The Dark Knight and Batman Begins. The idea was to beef up the storytelling talent on the team.

“Goyer was on the top of my list, and I never thought in a million years we would get him,” Anthony said.

Goyer was a big fan of the game, and he agreed to work on the second game as well. He wanted to emphasize the returning heroes such as Frank Woods (pictured right), who was supposed to be dead. He comes back as a key character. Other important figures coming back include Alex Mason and Jason Hudson. These characters show you the experience of war in the first Cold War.

Anthony said, “We wanted to rewrite the rules of how we are going to do storytelling in Call of Duty. Having David on board from the start of this one gave me the confidence to do that.”

The counter the heroes, the writers created a new, memorable villain in Menendez. During the first Cold War, you see how this monster is created, Anthony said. Then you learn a lot more about the villain, almost to the point of sympathizing with him, Anthony said. In 2025, you then see what the monster is capable of doing.

One thing that will matter more in this game is player choice. You can decide which heroes and enemies live or die. Based on your choices, you may go on certain missions, but the results will change the new missions that are available to you. Your choices as a soldier will affect the course of geopolitics. It isn’t just a linear story with a linear campaign. The story branches in different directions and is replayable with different results.

Strike Force mode and other features

The game also has a new mode for fighting. Strike Force Mode lets you manage a Black Ops team from a commander’s point of view. At any given time, you can switch from one soldier on the team to another.

This was demonstrated in the second mission in the game. Set in 2025, you play soldier David Mason on a mission at the Keppel shipping terminal in Singapore. You can be the commander and see the battlefield from above (also called overwatch mode). You can see your soldiers thanks to data fed to you by your drones and sensors. You can see your team about to run into trouble and then direct them down a different corridor.

“This is something that we have never done before,” Anthony said.

“It’s now a non-linear battlefield,” Lamia said. “You will get to certain points in the game, with the second Cold War playing it out. You will have options in the campaign to make a decision to go into one area or another. Once you make a choice, you go in. From a story view, you can have a success or failure. Depending on what changes affects the geopolitical arc of the game. You can go back and replay because it is a sandbox mission. It is different every time.”” 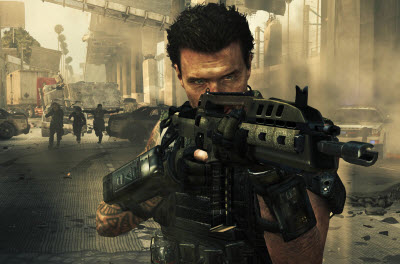 You can play the whole mission as commander, or you can jump into the role of a shooter on the ground. You can become a quad-rotor drone and shoot enemies from above, or you can hop into a CLAW, which is like a big robot mech. The battle unfolds in real-time and the gameplay is fluid. You can switch from one soldier to another in the middle of a firefight and outflank the enemy. As commander, you can call in an air strike or some extra drones to tip the balance in favor of your ground troops.

“You could just drop into a level and play as a soldier,” Lamia said. “You can play boots on the ground or be an assault sentry drone and take out some heavy machinery. You can reposition the troops as commander. Play inside the CLAW. You could play the entire level in overwatch mode. All the toys of the battlefield are at your disposal in Strke Force mode.”

The game will also have a world where you can fight zombies using various modes beyond the wave-based attacks. You can play the zombies game in cooperative mode, and it’s essentially a second game within a game.

“We were able to turn it into its own co-op mode,” Lamia said. “The fans loved it. We made more of it. It’s going to be its own game that sits on the Black Ops II disk with its own new world.”

But Lamia didn’t reveal much more about zombies.

David Vonderhaar, design director for multiplayer, said that the team wanted to push the boundaries in online battles where players fight against other players.

But multiplayer details are being saved for future events. The multiplayer modes will include zombie combat.

Rumors about Black Ops II were the source of intense speculation. One of them that had a ring of truth was the leak of an image of a quad-rotor drone, hinting at the near-future setting of the game. Another rumor suggested that China was one of the locations in the game. Some of those rumors were not so far off the mark. But the Treyarch team is obviously pleased that not all of their secrets spilled. The biggest surprise is that they decided to completely overhaul the game rather than deliver a standard sequel.

Overall, I’m intrigued at the game. I’ve only seen two levels, though. I’m not sure I’m going to like some of these weapons, which seem too powerful. But the enemies are going to be tougher, and so, I can see situations where those weapons are going to be useful. And I’m excited to learn that it won’t be the same old game and the gameplay will be a lot different from past Call of Duty titles.