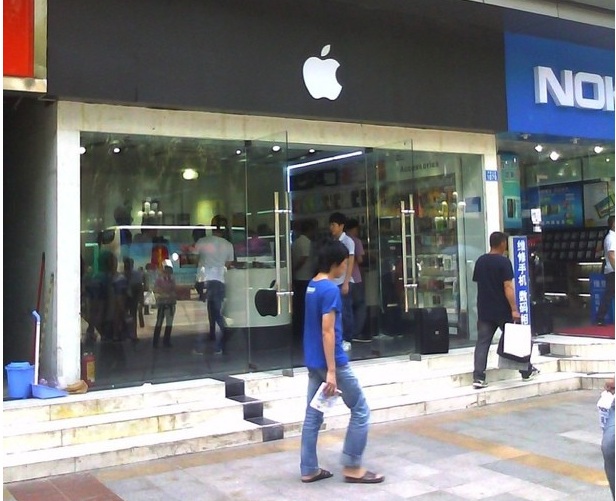 Mobile is booming in China, and the country’s hungry for Apple products. Apple’s annual report showed that its net sales in Asia increased $14.3 billion, or 174 percent, from 2010 to 2011. China has the most iPhone users in the world after the U.S.

But China still has a problem with tech piracy. Around 30 percent of Chinese Apple users get their devices through unlicensed channels or off the grey market, according to Chinese research firm iiMedia; that’s a pretty big piece of the pie.

So how can Apple — and its many app developers — claim the part of this market currently lost to piracy? Part of the solution lies in the hands of Apple itself. The company’s sluggish entry into the Chinese market is well behind consumer demand. In fact, the company didn’t start accepting App Store purchases in Chinese currency, the yuan, until November of 2011. Before that point, Chinese mobile users either had to own a dual-currency credit card or, more commonly, rely on pirated software to make App Store purchases, drawing a substantial number of app sales away from Apple’s profits.

China is the biggest emerging mobile market right now, and an opportunity Apple won’t want to squander. Here are three ways Apple can crack down on piracy and cash in on both device and app sales in China:

China is known for its confusing device store scene: On one corner you can find an Android-branded storefront that also offers iPhones and iPads for sale, and across the street you could find a dead-ringer imitation Apple store that has no official association with Apple. Chinese officials have shut down several fake Apple stores, and the company now has five official locations with plans for a sixth — supposedly Apple’s largest store yet — to open in the wealthy city of Dalian.

But with six official Apple stores open in the state of Ohio alone, the company still has inroads to make in China. With riots nearly breaking out when all five official Apple stores in China ran out of their iPhone 4S stock, it’s clear that the demand for Apple products is alive and well. The company could stand to make huge profits from opening more locations throughout this country of nearly 1.5 billion people.

But with better service and a better app browsing experience, the App Store will become more of a go-to source for apps. This, in turn, means that developers will see increased revenues from their apps.

Apple officially signed an agreement with China Telecom to start selling the iPhone 4S in March, ending the exclusivity of Apple’s iPhone partnership with China Unicom. But the company hasn’t signed with China Mobile, which not only completes the “Big Three” of Chinese telecom carriers; it’s also the largest of the trio. It has 655 million subscribers and claims to have 15 million iPhone users on its network — all of them using unofficial devices.

Samsung currently partners with all three of China’s big carriers, taking 24.3 percent of the market, compared to Apple’s 7.5 percent. Apple has an opportunity to distribute on the largest mobile network in the next biggest mobile market, and should jump at the chance while it still can.

Apple is in the midst of a heated legal battle in China over the name of its own product. A Chinese tech company, Proview Electronics, registered a trademark for “iPad” in 2000, and it’s not planning to give up rights to the name.

Right now, as the courts favor Proview’s position in the trademark case, it’s likely that Apple and Proview will settle the dispute out of court, meaning that Apple will have to pay up in order to continue using the iPad name in China. By the end of 2011, China accounted for an estimated six million iPads sold, and this number is expected to double by the end of 2012.

Around two million of the iPads sold in China last year were purchased through the grey market. If Apple wants to curb unofficial iPad sales, the first step is reclaiming the device’s name and solidifying its ownership of the tablet. While the iPad dominates tablet PCs in China, with over 70 percent of the market, the new iPad hasn’t made its way across the Pacific yet. There’s still room for Apple to focus on promoting the iPad in a big way, like it did for the iPhone 4S.

In short, Apple has a chance to claim a huge stake in one of the biggest mobile markets in the world, but doing so will mean addressing China’s piracy problem and offering legitimate channels to meet the country’s intense demand for a piece of the Apple pie.

Chris Shen is general manager of Shanghai-based online game developer and operator The9’s mobile business unit and has served as the vice president at The9 Limited since January 2006. He previously served as group account director and account director for several renowned advertising agencies in Shanghai and Taipei, mainly focused on servicing multinational brands of different industries, including fast-moving consumer goods, financial services and retailing.