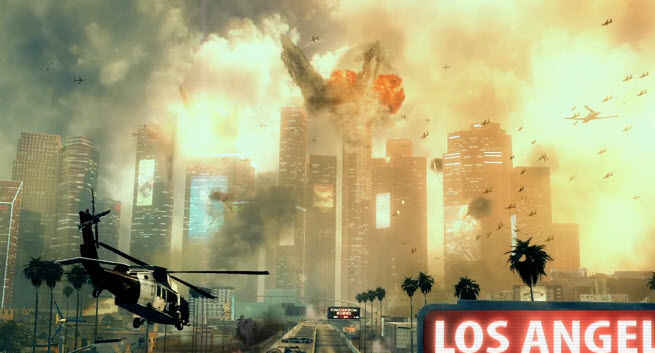 In Call of Duty: Black Ops II, a terrorist leader takes over America’s drone and robot armies and turns them against their creators. But some gamers have reacted to this scenario — set in 2025 — with scepticism.

Now, Activision has released videos describing all of the research it did on the subject of future warfare and just how plausible the plot of this first-person shooter could be. The developers at Treyarch, the studio behind the game, insist the storytelling is reasonable and have created this five-part video documentary to show off the new sci-fi ways to kill.

As we noted earlier, Black Ops II has some scenes in the 1980s, but it moves into a near future where a terrorist leader has hacked into America’s military systems and hijacked an entire fleet of unmanned aerial vehicles (UAVs). The leader, Raul Menendez, sends them to destroy American cities such as Los Angeles and then threatens China, triggering a potential global war that only black operations agents can head off.

The flashpoint for the conflict turns out to be a bid to corner the market on rare earth elements of which China holds 95 percent. If we’ve fought wars for control of oil supplies, then it’s not crazy to think that we’d fight for these metals, which are a key part of the electronics food chain and a subject of trade disputes. Those rare earth elements are also the root of all of our military electronics equipment.

Part of this awesome arsenal is a currently experimental microwave heat-ray gun and a self-guiding bullet. Both of these weapons are in development. In the 1980s scenes, you get to see the weapons of the old days, and then you see how they compare to the weapons that change war in the future.

Another weapon is the quad-rotor drone with an on-board camera. Such machines already exist, and they’re becoming a bigger part of America’s military muscle. The Central Intelligence Agency has waged a secret “drone war” against Al-Qaeda operatives in Pakistan and other countries. Wayward UAVs are also in the news: Pilot error may have led to a drone falling into the hands of Iran.

The Federal Aviation Administration is even integrating drones into civilian air operations. And ground-based robots are an increasingly significant part of the military’s future, according to Wired for War author Peter Singer. With all the news about Anonymous and hacking, it’s entirely plausible that a terrorist could launch a cyber attack that takes over a fleet of robots.

Check out the videos below, headlined by retired Lt. Col. Oliver North and Singer. Singer says, “The future is not as far off as we think. We’re not ready for it.”