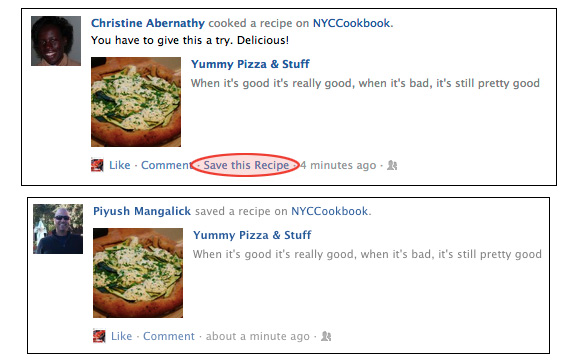 Following in the steps of its “actions,” Facebook on Wednesday introduced a new Timeline tool for third-party applications called action links. These customizable links will appear below an app’s post on your timeline or news feed alongside the links for Like and Comment. You’ll start to see the new links immediately on full web versions of Facebook, but they’re not on mobile.

These links will allow viewers to do specific tasks related to the post or app, and they’re not limited to Facebook’s built-in action types — Read, Listen, and Watch. For example, you can now “Fave this Product” for a Fab.com post, which will add something you see on a friend’s feed to your own Fab.com list. Some other early examples include “Save this Place” on Foursquare and “Save this Recipe” for a cooking app. When you click the link, you will complete the action and also post a story on your timeline/feed/ticker telling all of your friends that you did so. That won’t be annoying at all.

“Action links tie one action to another, and can be part of any Open Graph story.” Facebook software engineer Alex Wyler said in a post announcing the new feature. “Developers can designate an action link for any action they define, which will then appear throughout Facebook.”

Developers who want to start making their own action links can check out the documentation page for instructions.