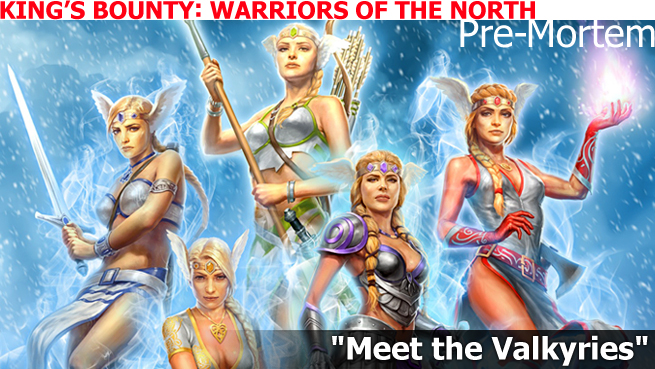 Editor’s Note: Welcome to the second exclusive Pre-Mortem for King’s Bounty: Warriors of the North. In each Pre-Mortem, an individual team member will discuss specific aspects of a game, shedding light on the decisions made, sources of inspiration, and much more. We hope it provides an informative, personal, and entertaining look into the art of game design. Enjoy! ~Sebastian

Hello everyone, my name is Denis Maltzev and I’m the King’s Bounty: Warriors of the North project lead at 1C Company. I hope you had a chance to read the first developer diary so you know the main storyline of the new King’s Bounty game, as well as figure out which of the units from the new Vikings race to use. So now you have the board, the chess figures, and know how to play. But there are some other things that influence the battlefield, right? Read on.

As you know in all the King’s Bounty series games, one of the biggest roles was always dedicated to special companions, the ones who helped the main protagonist fight through. The first game featured four Spirits of Rage and some wonderful wives, whereas Princess Amilie was followed by a cute, but highly powerful Pet Dragon along with various replaceable armor-bearers.

We had a long brainstorming about who could become a worthy ally to our Viking. The initial idea was to give our strong and powerful Olaf a selection of new, even more beautiful lady companions, a.k.a wives. But since similar characters were in King’s Bounty: The Legend and also because there were journalists and players who joked about Princess Emily’s armor-bearers whom they called ‘hubbies’, we decided to skip the family thing all together. But getting rid of fascinating females would have been wrong, so the decision was made to choose Valkyries – the gorgeous goddess-like female fighters from Norse mythology.

The key thing about Valkyries in King’s Bounty: Warriors of the North is that — unlike the aforementioned ‘hubbies’ and Pet Dragon — they act both as companions while traveling and Spirits of Rage on the battlefield. So they are quite handy.

We chose five to be in the game. Every Valkyrie has her own unique abilities. Apart from the active participation in the battle our Valkyries play an important role in the development of the main character. Valkyries will give various and considerable bonuses to Olaf’s specific stats. Moreover, Olaf travels along with all five female-fighters, however he will need to choose one of them to become the main Valkyrie (not the favorite wife!), and her bonus will be 100 percent active unlike the other four with just 25 percent of their powers. Of course our female warriors will gain experience during the battle and it will only improve their combat abilities. If you want to increase their level, and hence raise the bonus they give to Olaf, you will have to do the following. I’m sure most of you have had lots of unneeded equipment items while playing the King’s Bounty games you wanted to get rid of. Olaf will now be able to sacrifice to a Valkyrie a specific item type allowing them to progress and gain levels faster. The higher their levels the more bonuses they give. Valkyries can reach the level cap only if you accomplish a special quest unique for each of your companions.

Now let’s get to know two of the fierce lady-fighters a little bit better. 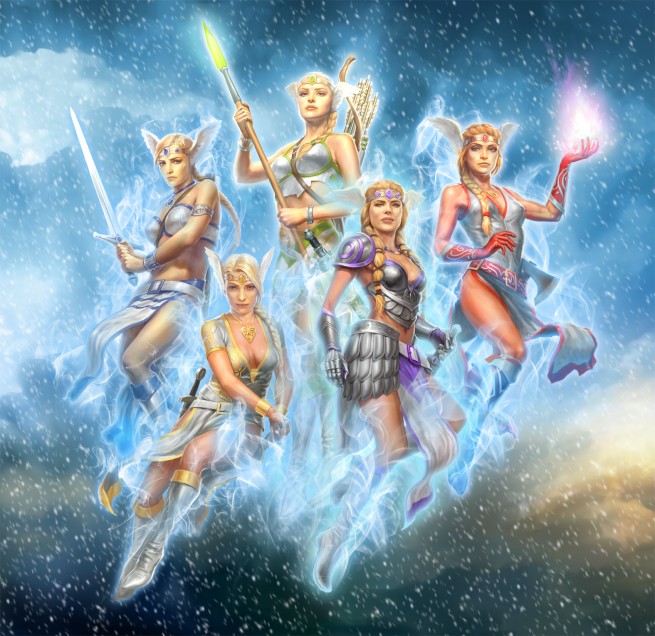 Hildr loves being in the heart of the battle. She feels the rage and anger of the fallen and the victory of the ones that win on the battlefield. She respects the gods and the traditions, and she prefers axes. Finally she loves anything that inflicts maximum damage to the enemy.

When it comes to fighting, she is not a fan of tactics and strategy, she’s a true warrior – just give her something to smash the enemy with, and a couple of tough soldiers to cover her back, and she’ll be happy. So, strong back and a weak mind, as they say. Hildr is always in the first lines of offense; hence she’s highly respected by the warriors.

Hildr has the “Valhalla Bane” skill – the hero troops become heavily inspired and receive +1 to speed and initiative for 1 battle.

She also has the combat ability, “Hildr Arrows,” which casts energy beams inflicting astral-magical damage to three random enemies. If an enemy is killed by this attack, the corpse vanishes, summoning an energy bunch that contains rage and mana.

No one could ever tell that Hrist is one of the most well-known fighters. She looks like a doll, always wearing luxurious garments, but she’s also so perfect at handling weapons that even Thor was once fascinated by her combat talents.

Hrist can overcome any competitor, be it even the most skillful and powerful one, if she has her favorite Krostar sword with her. Hrist is a real gem for everyone who’s into treasure hunting increasing the amount of gold in the chests. She also has a unique skill to reimburse partial cost of any unit killed in action.

She can also use her Greed skill on the battlefield summoning a handful of gold in a selected cell close to an enemy unit. The latter gets considerable damage if it picks up the gold. No friendly unit can be hurt though.

I’m sure some of you would like to have such a fighter around you!

That’s it for today. Hope you enjoyed this one. Next time we’ll tell you about the new magic and Olaf’s special abilities.