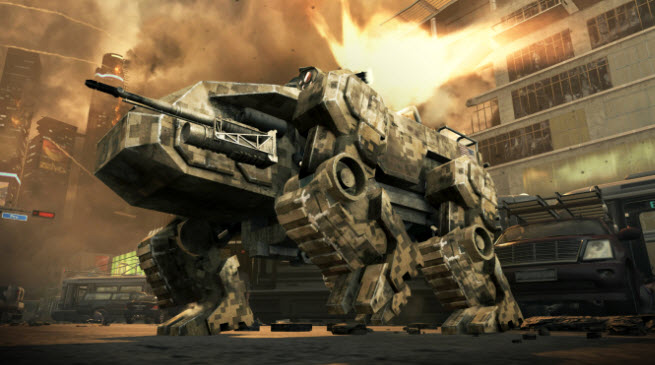 Activision Blizzard‘s Treyarch game studio lifted the veil on Call of Duty: Black Ops II yesterday. We got a special briefing at the company’s headquarters in Santa Monica, Calif. Here’s the list of the most surprising revelations from the rundown about this next game, which is the latest in the series that has dominated sales in recent years.

1. Oliver North, retired U.S. Marine Corps officer who was indicted for his involvement in the Iran-Contra affair,  served as a consultant for the design team. He was particularly helpful in describing the environment for black operations, or secret military missions, of the 1980s.

2. Los Angeles is destroyed. The city was evacuated, but the drones didn’t like the architecture and attacked en masse. You discover this in the first mission of the game. Well, if Washington, D.C.; New York; Paris; and London had their turn in Call of Duty: Modern Warfare 3, it’s logical that the entertainment capital of the world would be next on the list.

3. Rare earth elements. We’re going to be fighting over these 17 metals in the future. When you think about it, Iran has 10 percent of the world’s oil, but China has a lock on 95 percent of these minerals, which are used in all sorts of electronic products and batteries.

4. Frank Woods, an iconic soldier from the first Black Ops game, is back in the new game, even though he died already.

5. Zombies will be back and bigger than ever with a brand new world and in brand new modes. The undead have been sighted in Santa Monica.

6. Flying drones are going to take over combat in the future. Don’t go into battle without one. In the future, a madman villain will be able to hack into the military infrastructure and take control of the entire fleet of unmanned aerial vehicles.

7. The second Cold War will be between the U.S. and China.

8. The 3D graphics on consoles will look better than in previous games thanks to improvements in software efficiency. But the game still runs at 60 frames per second.

9. Strike Force Mode will allow you to play from different combat perspectives, including a commander with an overhead view of the battle, a mech-like robotic CLAW, a drone, or an individual soldier. You can switch from one role to another to bring the most firepower upon the enemy.

10. The last frontier for making realistic human faces is getting the lips to look right during speech. If the computer animators succeed in this regard, then video game characters will look as real as we do. Meet the face of Raul Menendez, the villain of the game.

11. One of the sniper guns has a scope that lets you see the outlines of enemies hiding behind barriers of wood, metal, or concrete. If you fire at them, you can kill them.

12. They did motion capture with a horse. And you get to ride a horse as a player.