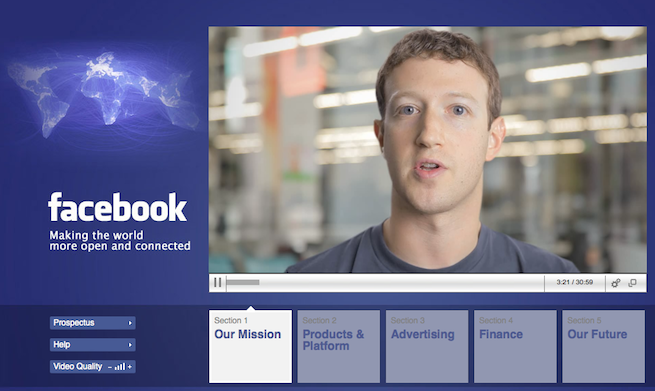 Facebook has released its “retail roadshow video,” encouraging a broader public — a public who has used Facebook every day since 2005 — to invest in the company’s initial public offering.

“Your life is an amazing story that a lot of people would be interested in if you told it,” said Chris Cox, vice president of product at Facebook in the video. “The social graph is something that has always existed as long as there were two people on earth.”

The retail roadshow video goes on for 30 minutes and features chief executive Mark Zuckerberg, along with chief financial officer David Ebersman, chief operating officer Sheryl Sandberg, and Cox. In it, the Facebook crew discusses the company’s mission, products, advertising, finance, and the future of Facebook.

Putting these videos out has become common practice, with lots of tech companies, including Groupon, partaking in the new tradition during the days leading up to their IPOs. Zuckerberg and Facebook, however, have executed the video a little differently, tying in a strong dose of nostalgia and Coldplay-esque music. They talk about the beginnings of Facebook, way back in 2005, when the only photo you could upload was a profile picture. The video then details the company’s expansion to photo albums, while displaying pictures of mothers and babies, people in funky sunglasses, and other obvious representatives of Everyman. The company then goes on to talk about Timeline, the platform, advertising, it even includes a cameo of Ben & Jerry’s executives talking about Facebook’s reach.

The company also includes bits of actual information, such as the fact that Facebook’s members leave comments on the site one billion times a day, and that Facebook has 488 million mobile users. These stats you can also find in Facebook’s prospectus, which was updated today to include Facebook’s “initial public offering range” of $28 to $35 per share, although to get information out of a prospectus you have to be able to read. With a video, by contrast, you could be convinced to buy stock even if you’re illiterate.

Facebook is expected to IPO as soon as May 18.

We can’t embed the roadshow video, but if you don’t want to watch all 30 minutes of it, we’ve included some highlights below.