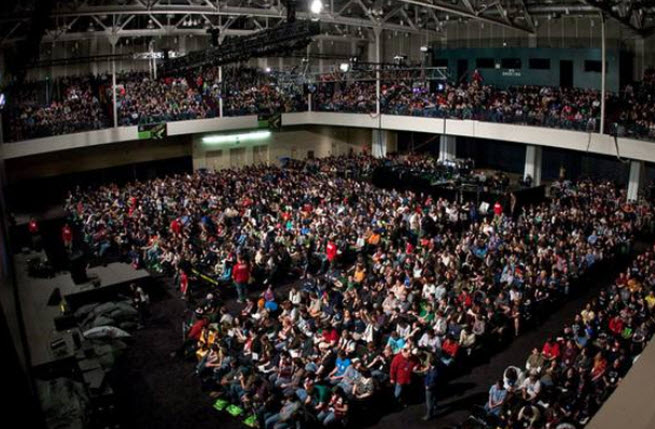 Hey, do you remember all the way back on April 25 when pre-registration opened for this fall’s Penny Arcade Expo and they had plenty of badges for everyone? That was nice, wasn’t it? No more: PAX Prime 2012 is now sold out of all three- and single-day badges.

We knew it would happen; the show consistently runs out of tickets well in advance, but the speed at which it happened this time is surprising. Moments after registration opened, the online vendor handling the transactions crashed. After a few attempts to get the system back up again, Penny Arcade pulled it down completely and took some time to regroup before opening registration back up on Wednesday.

Last year’s show took 21 days to sell out of three-day badges, according to the show’s official Twitter account. PAX Prime 2012 ran out in less than 24 hours. By Thursday night, the single-day badges were also gone. Clearly, demand for the expo is growing faster than the event can adapt; in 2010, the show moved its main theater from the Washington State Convention Center (where the rest of PAX happens) to Benaroya Hall a few blocks away. On-site registration and some panels have also relocated to the nearby Sheraton Hotel, but the show continues to sell out faster every year.

So, if you didn’t get a badge in the very small window in which it was possible, PAX Scalper Watch 2012 begins now. People are already offering single-day passes on eBay for $200 each, and as of this writing, one three-day ticket has gone from $65 (the original sale price) to $295 in 16 bids. Bear in mind that even if these sellers are on the up-and-up, PAX doesn’t mail badges out until a couple weeks before the show; you are essentially bidding on someone’s promise to mail you an item they don’t yet have — and hoping they don’t mail you a counterfeit one.

PAX Prime 2012 will take place from August 31 to September 2 in Seattle.