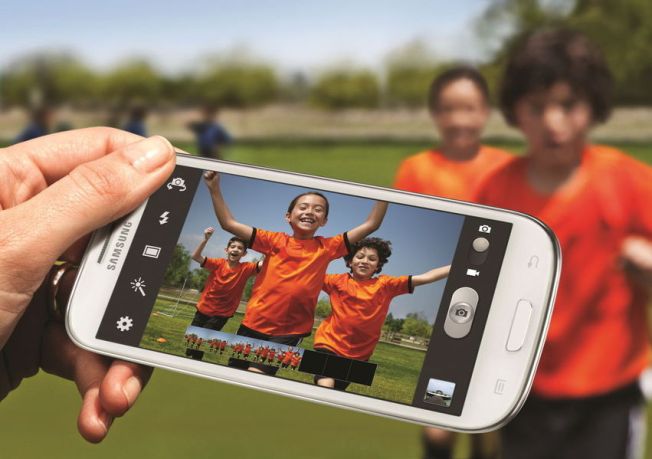 After whipping up an iPhone-like buzz for its Galaxy S series, Samsung today finally unveiled its latest entry in the series, the Galaxy S III.

As expected, the phone is an absolute monster, with a huge 4.8-inch screen sporting a 720p resolution. Larger than last year’s Galaxy S II, but smaller than Samsung’s tablet/smartphone hybrid the Galaxy Note, the new flagship device will differentiate itself with eye tracking capabilities, dubbed Smart Stay. The Galaxy S III’s 1.9-megapixel front-facing camera monitors your eyes to know when you’re looking at it, which keeps it from going to sleep from inactivity.

“The S III is more like a good friend who listens intently and responds quickly,” the rep said. Of course, the fact that Samsung failed to give its assistant app a human-like name is telling. With the iPhone 4S, you talk to Siri. With the Galaxy S III, you talk to S Voice.

Spec-wise, the Galaxy S III features an 8-megapixel rear camera with burst and best-shot modes (similar to HTC’s One series), a huge 2,1000 mAh battery (necessary for that massive screen), NFC, and Bluetooth 4.0. It weighs only 133 grams and is 8.6 millimeters thick. A 3G HSPA+ version of the phone will launch at the end of the month, while a 4G LTE version is coming later this summer. The launch will begin in Europe, followed by Asia, Africa, and Latin America (be prepared to wait for a while, North Amerca).

One interesting feature, dubbed Direct Call, shows the kind of thoughtful design Samsung is going for with the new phone. If you’re texting someone, you can simply hold the phone up to your ear to make a phone call to that number.

The Galaxy S III’s S Beam sharing will allow you to throw movies and music to other phones. S Beam combines NFC technology with Wi-Fi Direct, so you only have to tap another Galaxy S III to share content with it. It can also send content to TVs, as well as make the TVs mirror what’s on your phone’s screen.

It also comes with an attempt at a more naturalistic look and feel.

“For the design and UI of the S III, we tried to recreate the curves of nature,” a Samsung rep said at the event. Samsung also announced a donation to the World Wildlife Fund (I guess that’s one way to give back, after totally ripping off Mother Nature’s design IP).  It sports a new version of Samsung’s Android UI tweaks, “TouchWiz Nature UX,” which adds soothing nature sounds. The phone will be available in Marble White or Pebble Blue.

In a bid to improve multitasking on Android, the Galaxy S III has a “Pop up play” feature, which looks like picture-in-picture. It lets you do two things at once, something that wasn’t as feasible with smaller screen sizes.

Gushing about the camera, a Samsung rep said, “this one raises the bar.” The Galaxy S III’s shooter sports zero shutter lag, which means you’ll snap exactly what you see on-screen. The camera app launches in just 990 milliseconds. It has a backside illumination sensor, video stabilization, and can capture still photos while recording video (again, like HTC’s recent crop).

The company is planning pop-up stores to give “thousands” of customers the ability to play with the Galaxy S III.