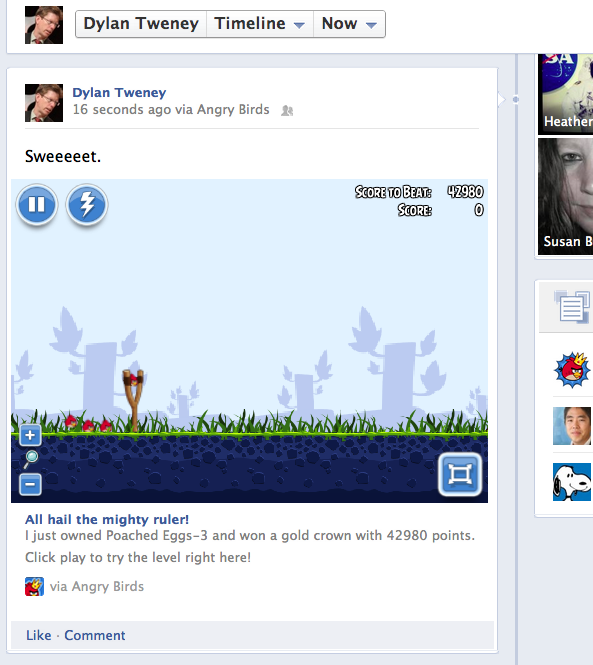 Rovio released Angry Birds for Facebook on February 14, but now it’s done one better: You can play the game right in your Timeline.

Rovio announced the news today on its blog.

The way it works is this: When you’re playing the Angry Birds Facebook app, the game occasionally offers you the chance to share one of your “accomplishments.” It took me about 2 minutes to get one of these offers, so it’s not like it’s difficult or anything. When you share it, Facebook actually embeds a tiny, playable version of that level right in your Timeline.

Then, if your friends are among the .002 percent of the human population that has not yet heard of or tried they game, they can play it there and get as addicted to Angry Birds as you are, the poor saps. If they ever get tired of playing the tiny version of the game, there’s an option for them to click over to the full-screen version.

Angry Birds has been downloaded more 750 million times since its launch in December 2009, and the newest game, Angry Birds Space, reached 50 million players in a little over a month. The phenomenal success of the game has led Rovio to release it across a wide variety of platforms, including iOS, Android, Google Chrome, Google+, and PlayStation 3. There’s even a Windows Phone version. It has spawned a host of collateral products, including plush toys, T-shirts, hats, and even an upcoming TV cartoon series.

Game companies don’t get this successful without mastering pathologically addictive gameplay. The in-Timeline sharing shows that Rovio is now figuring out the second key to social gaming success: the kind of annoying, viral sharing that made Zynga so successful.