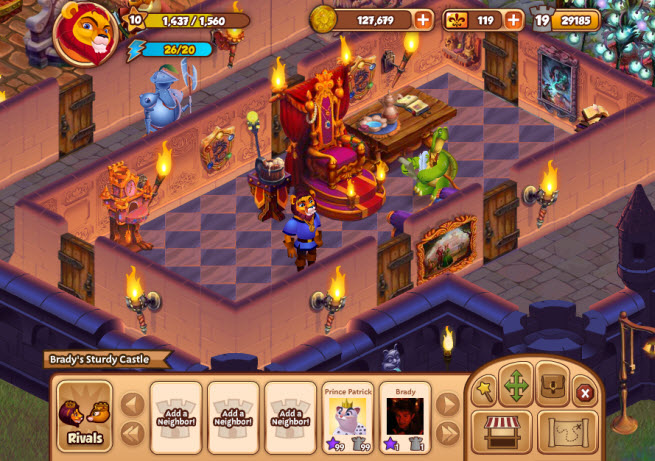 Ravenshire Castle is launching today on Facebook. It is the final chapter in the Raven World series created by a team of developers at Lolapps, which was once on the top charts of Facebook gaming. The fact that Ravenshire Castle made it this far is a minor miracle, and the history of this series tells a lot about the evolution of Facebook games.

Most of the development team at San Francisco-based Lolapps lost their jobs last month after their acquirer, Hong Kong-based 6waves, decided to scale back on its internal development studios to focus on mobile games and third-party development by outside developers. But the team was so close to finishing that a determined group decided to finish Ravenshire Castle, said Brady Flynn, product manager on the game.

Arjun Sethi, former chief executive of Lolapps, and Lolapps co-founders Kavin Stewart and Brian Rue put up the money for a new game studio, Silver Lake. The game was so close to completion at the time of the layoffs that they wanted to see it through, and Silver Lake obtained a third-party deal with 6waves to complete the game. A dozen developers from the team stayed on to finish the work, and the final team has shrunk to six. Glen Dahlgren served as lead designer on the project for most of its duration, though he left after the layoffs.

“We felt we owed this to the team,” Sethi said, in an interview with GamesBeat. “A lot of them had worked on it for a year. We all felt like it was a groundbreaking title.”

Zynga, the arch rival that pretty much put an end to Lolapps’ run on Facebook, launched its own castle game, CastleVille, back in December. But Flynn says the resemblance is in name only. While CastleVille is set in an outdoor environment, Ravenshire Castle shows its characters inside the castle, which has been abandoned and needs to be spruced up by the player.

The game has pretty two-dimensional graphics, and it uses Sean Cooper’s Fliso engine, which allows Adobe Flash to display many more moving objects without slowing down. Fliso version 3.1 also enables players to go full screen with a high-definition map space that is about eight times bigger than the original Ravenwood Fair game, Flynn said. The castles are beautiful, and they float in the sky. Characters are more fully animated, and they can move in more directions than is typical in a Facebook game. The music in the game is based on ten different tracks that fade in or fade out and give the game a more dramatic feeling.

You can build and decorate your castle through more than 40 levels of the game. You can also engage in player versus player competition, a first for the Raven World series. You can, for instance, visit the castles of your friends and raid them. Instead of fighting, though, you simply sneak into their castles and steal things from them. Your job is to nab stuff before the guards stop you, Flynn said.

“We’re proud of how we created the stealth game mechanic in a social games,” Flynn said. “We wanted to push the boundaries to a new level.” 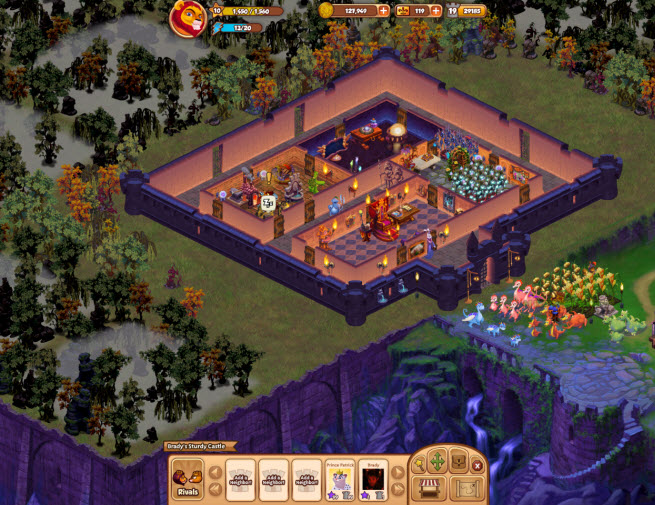 The series endured a long roller coaster ride throughout its run. It started with Ravenwood Fair, designed by veteran game developers John Romero and Brenda Brathwaite. About 2.5 years ago, they created the first game with a small team of developers from Lolapps and launched it in October of 2010. It was a smash hit that quickly rose through the charts and put Lolapps on the map as a serious contender in competition with Zynga, Playfish, and Crowdstar.

Romero conceived several more games in the series, and Brathwaite did the initial work on the Ravenshire Castle game. She came up with an idea for building castles and created the name, but the work she did never materialized. Both Romero, the co-creator of the original Doom game, and Brathwaite, an equally well-known game developer, left in the spring of 2011 to create Loot Drop, a third-party developer of social games. The teams that stayed behind to work on Raven World games went off in their own direction. Brathwaite agrees that the game is far different from what she originally envisioned. Dahlgren led the the team that conceived of ideas such as stealth game play and the player versus player part of the game.

“They worked on the ideas, but we went in a different way with a team that was created after they left,” Flynn said.

The Ravenwood Fair game once topped 20 million monthly active users. By April 2011, Lolapps followed up with Ravenstone Mine, an expansion to the first game. Then, in July 2011, Lolapps merged with 6waves, which mostly published games developed by other developers that it didn’t own. Lolapps was supposed to be the internal development arm of 6waves. In October 2011, Lolapps launched Ravenskye City, a sequel to the Ravenwood Fair game. By this time, Lolapps’ audience had been shrinking while Zynga had grown into a billion-dollar giant. 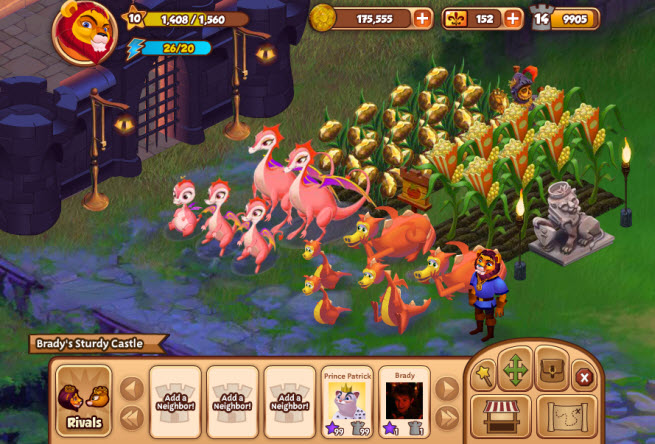 After that game shipped, Lolapps moved on to Ravenshire Castle, which was the final game in the series. But in the meantime, the Raven World series’ audience has dwindled. All of 6waves’ games now have only 5.3 million monthly active users. Ravenskye City has 2 million and Ravenwood Fair has 1.1 million players. If you add the traffic from third-party developers, 6waves has 20 million players, the company says.

With a dwindling audience, 6waves’ management decided to do less internal Facebook game development. It laid off about 80 percent of its game developers (most of the San Francisco Lolapps team), and the founders and Sethi departed. Since almost a year of development had already taken place on Ravenshire Castle, Sethi wanted to see the game completed, so he and the Lolapps co-founders provided the money.

When asked if Silver Lake would continue on as a developer, Flynn said that the company was formed simply to finish Ravenshire Castle. The remaining developers will share in the success if the title is successful, Sethi said.

Whatever happens after the launch is unclear. 6waves owns the rights to the Raven World franchise, and it has no plans to build more games. Ravenshire Castle is the swan song. It will be interesting to see if the fans return.

“It’s a bittersweet ending, since this is the last game,” Flynn said.

Check out the gallery of screenshots below.