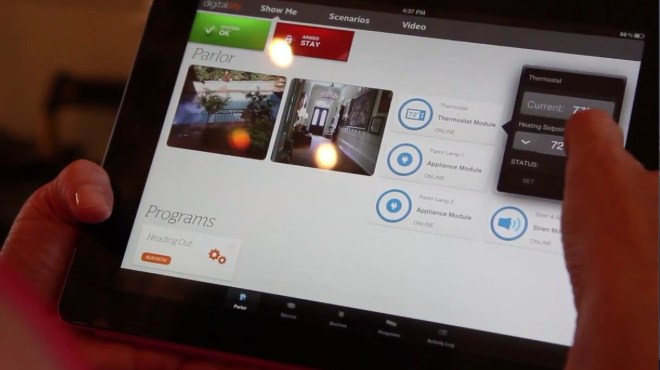 The home of the future is inching closer.

AT&T on Monday announced “Digital Life”, a home security and automation platform that allows home owners to have unfettered control over the various minutiae of their home , including shades, door locks, thermostats, and even moisture detectors.

All of this is controlled via a smartphone, tablet, or PC, potentially allowing owners to control their homes from an entirely different country

“Can you imagine breaking into a house and having all the lights come on?”asks AT&T’s Christy Jones in a promo video, referring to the services suite of security features, which come with a professional monitoring service.

AT&T will be running trials of the new services in Dallas and Atlanta this summer, with a national roll-out sometime after. One of the service’s features the company is stressing most strongly is its ability to be used via any broadband provider, not just AT&T.

Of course, the company’s efforts are nothing particularly new. Announced last fall, Verizon’s Home Monitoring and Control offers a similar suite of services. Same goes for Comcast’s Xfinity Home, which was launched last month. Google and Microsoft have also made headway in the space via Android@home and HomeOS, respectively — though neither company has any made any firm attempts to bring their efforts to market.

However, unlike Google and Microsoft, AT&T, Verizon, and Comcast already have a direct service link to their customers. This, coupled with the obvious room for market growth, is all the reason the companies need to invest in home automation.

Getting consumers to actually adopt the technology, however, will be something else entirely.