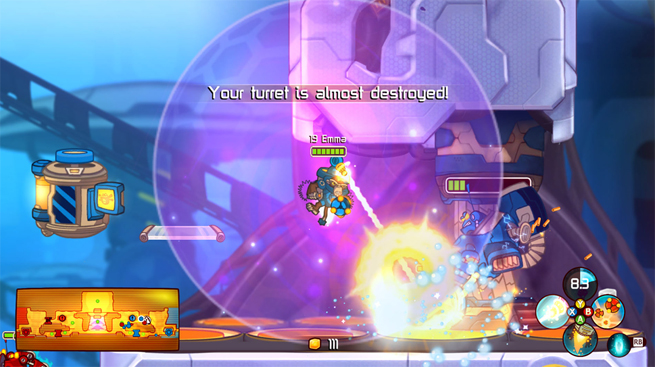 As Sheriff Lonestar, a space cowboy with a southern drawl, I had two options for the small army of droids making their way towards my defensive turret: I could  blow them up with sticks of dynamite or I could summon a bull to knock them back while the turret did the dirty work. I chose option C and did both. Now that my base was safe, I could press forward and hit my opponents on their home turf. Not bad — for a newbie.

Developer Ronimo Games’ latest title, Awesomenauts, is an attempt to bring the PC-centric multiplayer online battle arena (MOBA) genre to consoles. MOBAs have risen in popularity recently with the launch of games like League of Legends and Super Monday Night Combat, but they can be a little overwhelming for newcomers. If you’ve always wanted to give them a shot but don’t know where to start, Awesomenauts could be good way to get your feet wet — if you can survive a few growing pains.

The ’80s cartoon theme
If you ever spent a Saturday morning in front of a television in the 1980s, Awesomenauts will put a smile on your face. The game’s opening cinematic is pure nostalgia with its rockin’ theme song and character montage. Even the Xbox 360 achievements are nods to classic cartoons like G.I. Joe, He-Man, and Thundercats. Each Awesomenaut has its own distinct personality and charm whether it’s hulking robot Clunk, jetpack-wearing space chimp Yuri, or brainy alien invader Zoltar the Omniscient. You could easily picture them sitting on a shelf at Toys “R” Us, gracing a set of plastic cups at Burger King, or starring in a live-action movie with Vanilla Ice.

The simplicity
Awesomenauts is the MOBA formula at its most basic. Two teams, red and blue, battle. Each one gets a base. Computer-controlled droids (creeps) march across the map and duke it out somewhere in the middle, but neither side will make progress without the players’ help. As one of the game’s six unique heroes, players must work together with the droids to take down their opponents defenses and reach their “drillcore.” The first side to take out a drillcore wins. Currency called “Solar” is earned throughout the match, which is used to purchase and upgrade abilities mid-battle.

While Awesomenauts is lacking some of the depth found in other MOBA titles, it is user-friendly, especially for newcomers. Each character receives only two special abilities plus a basic attack. MOBA veterans might find this limiting, but newbies will be grateful they won’t have to go running for a strategy guide. Unlockable upgrades offer enough flexibility to keep things interesting without bogging down the player with too many choices.

The drop-in, drop-out multiplayer
Hopping into an Awesomenauts match is pretty painless, which is good because this game is all about cooperative multiplayer. Other than a practice mode, no offline gameplay is available. You can choose to start your own match or join one already in progress through the Quick Match option. Up to six players can join in the fun, with bots standing in for anyone who’s missing. The bots themselves are…OK. They’re competent enough to take a player out, but support-minded teammates will marvel at their stupidity. 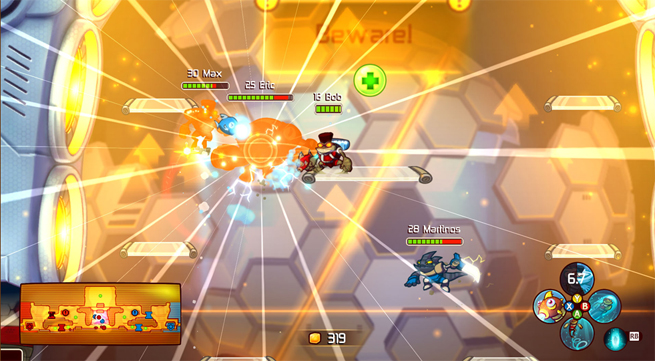 Balance issues
While Awesomenauts may be simple, it’s not easy. Beginning players will struggle through some losing matches against more experienced players who have unlocked better characters and upgrades. A well-built Clunk, who serves as the game’s “tank,” can be incredibly tough for new players to take down. Yuri, with his jetpack, long-range laser beam, and landmines, feels a little overpowered as well. As someone who often takes a support role in online games, it wasn’t until I reached level 6 and unlocked Zoltar and his healing abilities that things began to click for me and I stopped getting steamrolled. With no time limit, matches can sometimes feel like they’re dragging on, especially when you’re on the losing end.

It gets old kind of quickly
Currently, Awesomenauts has only six characters and three maps. Ronimo Games is promising downloadable content, but a feeling of deja vu will set in long before those are released. The game’s 2D side-scrolling graphics, while nice to look at, don’t offer much variation. By the time you reach level 11, you’ll have unlocked all the characters and seen the maps many, many times. Although plenty of upgrades await in the higher levels, unlocking them could start to feel like a grind. 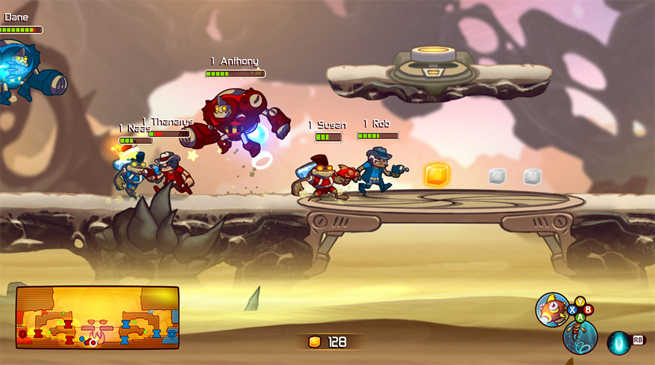 A questionable future
Awesomenauts publisher DTP Entertainment filed for insolvency less than a week before the game’s targeted release date, making its future uncertain. While the game did launch on time, DTP’s shaky financial situation could spell trouble for Ronimo’s DLC plans. Online-only games like Awesomenauts often rely on a steady stream of new content to hold players’ interest. If that content dries up, so could the player base. And a multiplayer game with no player base is a waste of hard drive space.

With its bright, cartoony visuals and easy-to-grasp concepts, Awesomenauts serves as a good introduction to the MOBA genre. While it might not have the longevity of a game like League of Legends, it’s sure to provide hours of entertainment for anyone with the patience to endure some initial butt-kicking.

Awesomenauts released on May 2, 2012 for the PlayStation 3 and Xbox 360. The publisher provided GamesBeat with an Xbox 360 download code for the purpose of this review.