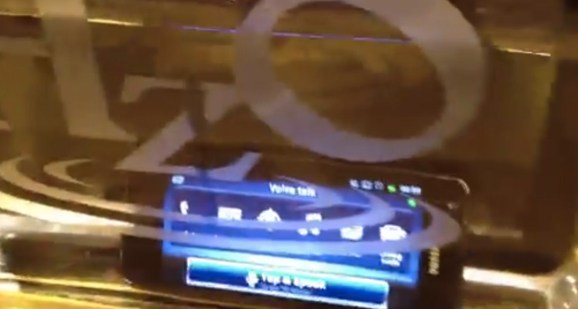 At the CTIA wireless conference this week, a lot of the tech advances we’re seeing are superficial and nonsensical. Not HzO, which showed off its incredible waterproofing tech to many folks tonight.

HzO provides a nanotech-engineered coating that protects phones and tablets from serious water damage, and it claims its solution is 100 times thicker than any similar water-resistant coating on the market. Its tech will soon be available for Apple and Samsung phones and tablets.

I decided to take one of its coated devices for a spin, a Samsung Android phone with its back cover removed. Watch the video above, and you’ll see me dunk the phone in water. I made sure to do it myself so there was no trickery involved. While tossing the phone in water, all I could think about was how many times I’ve heard someone say they dropped their phone in a sink, bath tub, or toilet. This could be one heck of a pre-emptive measure.

After dunking the phone without its back cover successfully with no apparent damage, I also thought about the market potential. Eventually, manufacturers like Apple and Samsung could team up with a company like HzO and make all of its phones waterproof or give consumers that option before shipping. Or, a step further, nanotech coating every major smart device could just become a standard feature we come to expect from our gadgets.