Carrier IQ, a company once vilified for its handling of user data, has just announced its latest hire for the key position of chief privacy officer. New employee Magnolia Mansourkia Mobley comes to Carrier IQ from Verizon, where she served as the carrier’s chief privacy counsel.

Carrier IQ came onto our radar late last year when a hacker alleged the company was logging the keystrokes and locations of more than 100 million mobile-phone users.

Carrier IQ, which monitors mobile data and sends reports related to app performance, signal strength, and battery life back to carriers and manufacturers, insisted it wasn’t involved in any wrongdoing. The company went so far as to voluntarily request meetings with feds to clear its name, and a couple of the major carriers on Carrier IQ’s client list also came forward to vouch for the company.

Still, the fiasco ended with a huge black eye for Carrier IQ and a couple lingering legal questions from consumers and foreign governments.

Today’s announcement is far enough after the original scandal that we don’t think it’s a pure PR move.

“Carrier IQ is taking a proactive approach to privacy, and we wanted to bring someone on board that had deep knowledge and expertise in the privacy and security sector within the telecommunications field,” a Carrier IQ rep told VentureBeat today. “Maggie was the perfect blend of all three, with an extensive 12-year career in telecom and privacy.”

Here’s a little about Mobley’s background: She graduated from California Western School of Law in 1998. Just two years after her graduation, she got a job at MCI Inc., a telecom that later became a Verizon subsidiary through a series of mergers and acquisitions. She moved up the ranks at Verizon, becoming assistant general counsel in 2006 and chief privacy counsel a few years later. 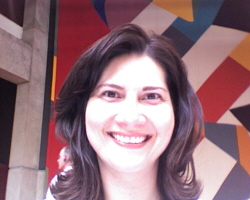 Mobley (pictured left) is certified by the International Association of Privacy Professionals and has been recognized throughout her career as an expert in information privacy and a frequent speaker at industry events. Carrier IQ also said Mobley was “instrumental” in Verizon’s securing a spot on the top-20 most trusted companies list compiled by TRUSTe and the Ponemon Institute.

At the troubled mobile data company, Mobley will be “externally working with customers and regulators on best practices, enabling transparency, and building privacy into innovation; working within CIQ to build a culture of privacy where each employee understands and integrates the foundations of privacy into their daily duties; and managing the day-to-day legal matters of a growing startup,” the Carrier IQ rep continued.