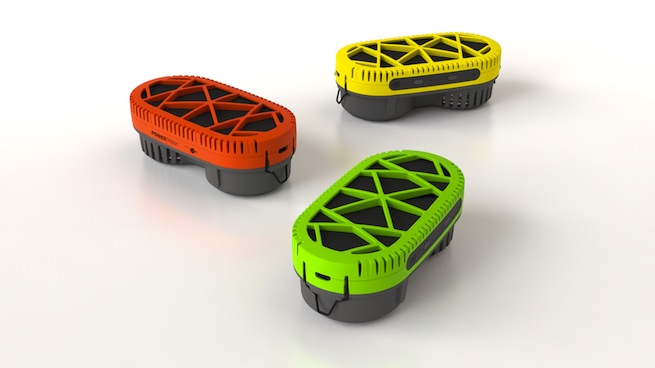 Fuel cell gadget charger PowerTrekk is finally hits store shelves in the States. Starting May 2012, you can head to outdoor equipment store REI to purchase this nifty device, which charges electronics with only water.

PowerTrekk first debuted at the Consumer Electronics Show 2012. The small device can charge cell phones, MP3 players, and eventually laptops with the addition of mere tap water. The key is a special reaction that produces hydrogen on demand, which is stored in a hydrogen fuel cell battery. All you have to do is pour water into the device to start charging whatever your heart desires (so long as it can be charged with a USB cable).

The water is confined to a PowerPukk, a small disc that holds the powder and can be sealed up after the water is added. That way you don’t accidentally spill water all over the iPhone you’re trying to charge. The PowerTrekk charger is currently available in parts of Europe and slowly making its way to the U.S., retailing for $230. By the end of this summer, you’ll be able to buy them at REI stores across the United States.

The science behind PowerTrekk was developed by Michael Lefenfeld of Signa Chemistry. Lefenfeld’s grandfather challenged him to create a bathroom air freshener, never realizing he’d wind up with reaction that could produce hydrogen.

“My grandfather was a vain man who had stopped smoking in later years, so he no longer carried matches around. He wanted an air freshener for the restroom,” said Lefenfeld in an interview with VentureBeat.

He used his chemistry background to develop a metallic powder-based air freshener that could go in the toilet. The powder had one key problem though: When combined with water it would ignite. After some tinkering, Lefenfeld removed the combustible aspect of the reaction, but was pleased to discover he could now create hydrogen on demand.

“I started working on the science side, I found that the material would react with water and produce hydrogen in a controllable reaction,” Lefenfeld said.

Fuel cell company MyFC got wind of Lefenfeld’s discovering and saw the great potential in creating hydrogen by mixing water and small amounts of the metal powder. The company realized it could use the hydrogen in a fuel-cell battery set up and wound up developing PowerTrekk.

Signa Chemistry grew out of the air freshener project, becoming a full-fledged business that specializes in stabilizing reactive metals. Other companies took notice of Lefenfeld’s work for consumer applications.

Lefenfeld’s hydrogen-producing powder is also used in Pedego electric bicycles. He hopes that his chemical discovery will be used to replace “noisy gas generators,” and will push forward an overall trend of greener energy solutions.

Other fuel-cell chargers have popped up in the last few years, most notably the Horizon MinPak. The device uses a special cartridge to create hydrogen, but isn’t mass marketed. You can only purchase the MiniPak from Horizon’s website and you must inquire for pricing information.