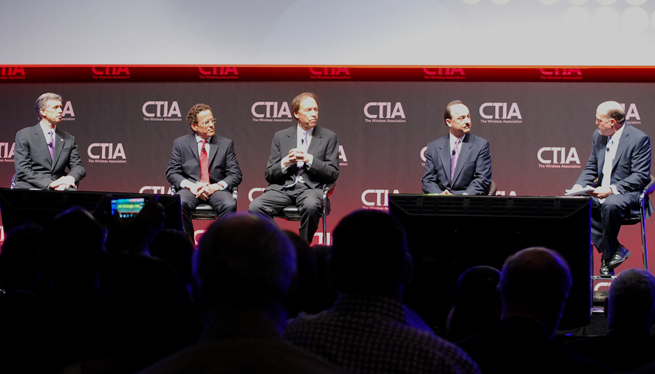 When the CEOs of AT&T Mobility, Verizon Wireless, Sprint, and T-Mobile sit together on the same panel, sparks fly.

Just as they did a year ago, these prominent CEOs sat down today at the CTIA Wireless conference to talk about the mobile industry. Bombastic CNBC host Jim Cramer led the keynote session, which featured Ralph de la Vega, CEO of AT&T Mobility; Dan Hesse, CEO of Sprint Nextel; Dan Mead, CEO of Verizon Wireless; and Philipp Humm, CEO of T-Mobile.

Before the session began, each CEO gave a speech outlining his company’s priorities and expectations of consumers. What was fascinating about seeing them all lined up in a row was seeing how their styles contrast.

After the four CEOS got their time to shine, things really got interesting when they had to sit next to each other and answer questions from the entertaining and sometimes erratic Cramer, who hosts Mad Money on CNBC.

Cramer and the CEOs mostly acted civilly throughout, with each of the CEOs tying his answers to his presentation. Hesse referred to security and trust, de la Vega to LTE and home solutions, Mead to spectrum, and Humm to T-Mobile’s bright future.

One of the most interesting moments of the conversation was when Cramer brought up the new advertisement T-Mobile showed off. In the ad, a T-Mobile motorcyclist quickly outruns an AT&T motorcyclist, signifying the relative speeds of their mobile networks. AT&T’s de la Vega said the ad was simply not true and that its LTE network was quite fast. Humm shot back, saying the ad is iPhone-specific, and correctly pointed out that the iPhone can only take advantage of HSPA 14 on AT&T. de la Vega finished the verbal sparring by saying it’s not fair to compare a single device’s performance on a network to the network as a whole.

In another interesting moment, Cramer suggested to Humm that T-Mobile should separate from parent company Deutsche Telekom and file for its own IPO. Humm smartly refused to say anything on the matter but admitted that CTIA would be the perfect audience for such an announcement.

As for a full video recap of the panel, we will post a link once one is available.