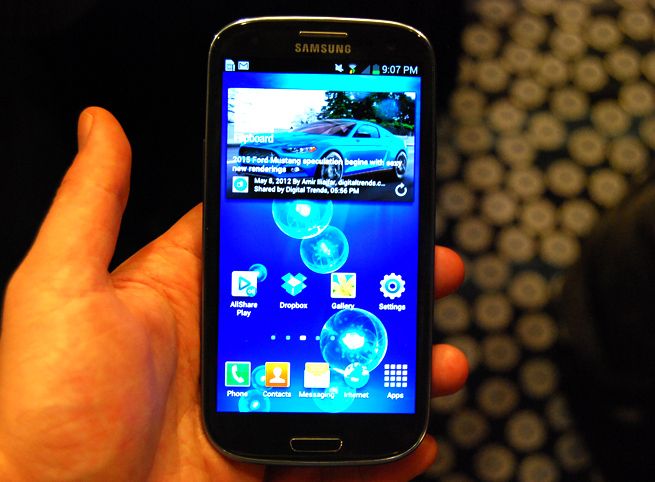 Despite the hype, it turns out Samsung’s Galaxy S III doesn’t quite dazzle as bright as a supernova.

Last night I finally got my hands on Samsung’s hyped Galaxy S III superphone at the CTIA Wireless conference. While the features like S Voice, eye-tracking, and TouchWiz tweaks stood out, all I could think of was how it compared to the HTC One X, the other Android superphone that’s turning heads these days.

From a short demo where a Samsung PR representative walked me through the phone’s features, and from playing around with the speedy device myself, I liked what I saw. The screen is beautiful, the performance sizzled, and Flipboard for Android was fun to play around with. I was a big fan of the Samsung Galaxy S II and now Samsung has taken that phone to a new level here.

Both the Galaxy S III and HTC One X are huge: The Galaxy has a 4.8-inch screen, while the One has a 4.7-inch screen. (If you have small hands, these phones aren’t your friend.) And both phones have blazing performance and great cameras that could please the most discerning perfectionists.

But if you look at the Galaxy S III and HTC One X side by side (see the slideshows below), it’s clear that HTC has won on the design front, with a curved polycarbonate body, while Samsung has opted for a somewhat cheap-feeling plastic body.

The One X is available on AT&T now and will soon arrive on Sprint branded as the Evo 4G LTE. Samsung’s Galaxy S III will start showing up in stores around the world on May 29, but it will not hit the United States until some time in June.

Check out our full slideshow below to see more of the Galaxy S III in white and dark blue cases:

Check out page two to see the slideshow of the HTC X gallery for comparison to the Galaxy S III.