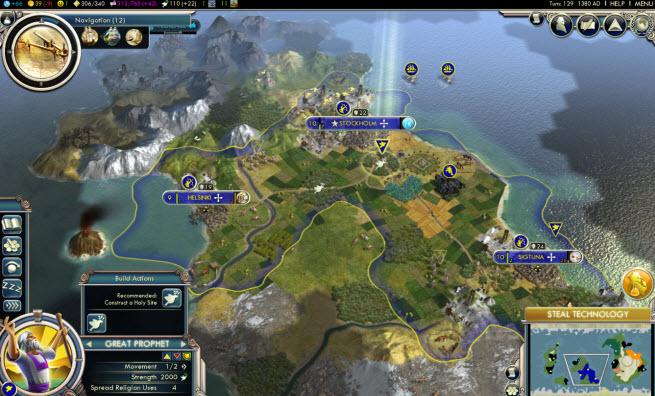 It might seem like an odd decision to create an expansion for a game that came out in 2010 as Firaxis Games is doing with Civilization V. We loved that game, but to justify an expansion, we want something new. Sid Meier’s Civilization V: Gods and Kings provides enough new features that it won’t be perceived as a boring repeat of the original. 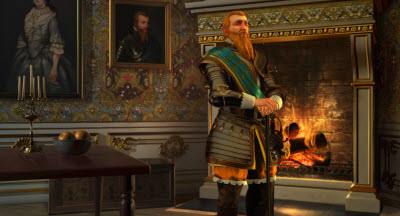 Firaxis Games developed the expansion, which the 2K Games unit of Take-Two Interactive will publish on June 19, keeping the franchise alive in the minds of strategy fans who enjoy the Civ power fantasy of being in charge of their own kingdoms.

We got a hands-on preview of the game, and we were not disappointed — except for the shortness of the demo. This game will introduce players to a new way to win — through the strategy of becoming a religious state — that will make it feel like you’re pursuing a brand new way to play a familiar game.

As we noted in an eariler preview, the Firaxis guys loaded this PC game expansion up with new features, including religion, espionage, improved combat, and new city-states. Those features are the reasons why you might consider paying for this expansion.

The expansion also has the usual expected incremental enhancements. The game has nine new civilizations (Carthage, Netherlands, the Celts, the Mayans, and Byzantines, among others), nine new leaders (William I, Prince of Orange; Boudicca of the Celts; Dido of Carthage; and Pacal the Great of the Mayans). Like with the base game, the new leaders also speak in their original languages. Thirty-four civilizations are now available in the game.

Gods and Kings has 27 new units, including Great War combat units (pictured at bottom), religious units, ranged units, and unique units for each new society. And it features nine new Wonders, including religious ones, that will help you win in a different way by making your citizenry happy.

My own personal jihad

I played as Boudicca, leading the Celts as they developed into a society that drew unity and strength from religion. Celtic cities generate more Faith if forests surround their cities. This part of the game changes how you build each city as you would normally chop down the trees and build farms on them. With this element of the religion, the trees now have additional value standing nearby. The Celts’ Pictish Warriors, who are unique to the race, can earn Faith if they are successful in combat. I added Faith along the way as I discovered ancient ruins and built monuments.

With religion, you can choose to develop a pious society. With enough Faith, I created a Pantheon of the gods and chose a belief. If you choose a belief in the game, you can lock out other players from having the same tenets. There are a wide variety of beliefs that you can adopt and those will give your civilization some kind of edge over others.

Eventually, you can build cathedrals and religious Wonders, though, I never got that far. Ed Beach (pictured right), project manager for the game at Firaxis, told me you could get in a race to have the best religion.

I did manage to get a Great Prophet, a character who enables you to found and help spread a new religion. Think Jesus or Muhammad. I used a Great Prophet a couple of times and found that my enemies’ cities had actually begun converting to my religion.

But religion can be defeated by other strategies, particularly emphasizing technological growth. If you hit the Renaissance and science becomes popular, the power of your religion wanes. That’s why it pays to remember to launch your jihads early.

That’s not the only change that will freshen up this game for season players. New civilizations such as the Dutch come with their own unique characteristics. They thrive in trade and can use a new privateer unit that can raid coastal cities and steal wealth from them. The Dutch are particularly good at taking marshes and building dikes that convert them into fertile farmland. They can develop polders that generate extra food and tulips that they can trade.

Firaxis has revamped the city-state system. You can bully city-states by moving military units near them. That may cause them to dislike you but result in good gifts. You can still satisfy quests for the city-states to win their favor, such as taking out barbarians nearby or attacking their enemies.

I saw the city-state dynamics come into play in my demo. The Aztecs and nasty Ottomans launched a surprise attack on me. To get to the battle front, I kept marching my troops through the territory of the city-state of Ragusa. They didn’t like that one bit and became more hostile to me. Fortunately, they didn’t attack. But I could have kept them from doing that by giving them gifts of gold so that they would become more friendly to me. I also could have used a spy to sway them in my direction, even as I was trespassing on their ground.

Associated with city-states is the new system of espionage. You can create a spy who can build up credibility inside a city-state and pull off a coup. The longer you wait, the more influence the spy has and the greater the probability of success of a coup. It might take you a lot of years to pull off that coup, but it takes a lot less resources and time than it would if you invaded the city-state outright.

If you fail, the city-state will execute the spy and hate you. But if you succeed, you can turn a city-state from an enemy to a friend. Spies can also intercept valuable information while embedded in another civilization, such as the society’s intentions towards you as a friend or foe. I played the demo until I got my first spy, but that triggered the end of the preview.

I liked this idea in the game, but Firaxis could have executed this with more flair by making the spies into actual characters with their own cinematics — just as the developer has done with the rulers in the game. Instead, you observe the actions of your spies by looking at charts or city-state screens. That’s not very exciting, considering the potential drama behind spying. 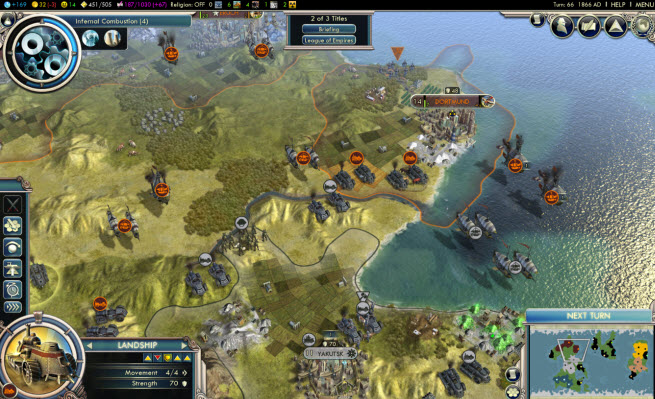 Combat usually throws the realism of Civlization off kilter. You can have battles or wars that last for a hundred years. Once you get over that, however, the combat system is becoming more and more palatable.

With this change, the combat mechanics are being changed from a 10-hit-point system to a 100-point system (think dice rolls for old board games), which slows down combat and adds more flexibility. That means you’ll take longer to kill an individual units and fight battles, which allows more time for front lines to form and for you to pull back and substitute units. Naval vessels now have both melee and ranged features. Melee fighters can raid cities and even capture them.

It still takes time for the computer to resolve battles and move through turns, but it is faster than the base game is now. That is an important improvement because I used to get a little pang of boredom each time that I hit the turn button. I almost felt like I could get up and get a snack and then come back.

The military units now include World War I-era tanks, planes, machine gunners, and artillery. I didn’t make it that far, but I did enjoy fighting a centuries-long war against the Ottomans and the Aztecs. I had to keep developing new military technologies, such as pikeman and catapults, to keep up with my enemies.

At one point, I had a long line of troops fighting in a combined arms fashion — warriors on the front line, archers behind, and catapults against the city walls — and I pretty much left the Ottomans exhausted. Then I went for the Aztecs, but I had a hard time clearing them out of the jungle even though they weren’t well-armed. There were also too many bottlenecks in the terrain — ocean tiles, mountains, and a big crater — so that I couldn’t get around them. I just had to keep throwing troops into frontal assaults. In the past, fighting a war wasn’t quite so satisfying.

I’m glad that Firaxis is returning to the game since these new features make the title more playable. They’re not just dressing it up with nice things. Rather, they’re going into the core of the gameplay and making a lot of improvements. That’s more than we’ve come to expect with expansions. As additions to old games go, this is a satisfying one.