Facebook is testing a feature in which users can choose to pay money to highlight their status updates for their friends.

The feature is fairly simple: add a status update just like you would ordinarily, then pay to have it highlighted. Highlighting will ensure that your friends actually see the status update, something you can’t otherwise count on. You can pay with their preferred credit card or PayPal.

Typically, only 10 percent of your Facebook friends may see a status update, although that number grows when you post something that attracts attention in the form of likes and responses. 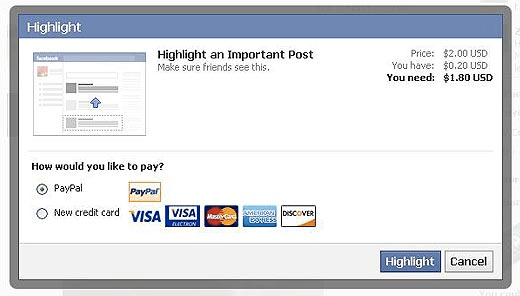 Facebook is always testing small changes and enhancements; most of these features never see the light of day. A Facebook representative confirmed to VentureBeat the social network is testing this new feature “with a small percentage of people… We’re constantly testing new features across the site. This particular test is simply to gauge people’s interest in this method of sharing with their friends.”

The rationale for Facebook is understandable; it lets the company make more money. And there’s utility for users too; they get a bigger megaphone. But creating a gateway for users to pay to increase the reach of their status messages is hugely problematic for at least three reasons.

First, this might increase the amount of noise on Facebook and decrease the utility of the algorithms used to sort through each user’s news feed. Users presented with too many picayune, annoying, or irrelevant messages could stop using Facebook as regularly. This would be exacerbated if their friends were broadcasting mini-ads or commercial messages.

There’s a reason Facebook’s friend- and content-ranking algorithms only show us around 10 percent of what our friends post on Facebook: It’s not all terribly interesting. Fiddle with that balance, and our interest in Facebook might diminish.

Facebook already carefully regulates how many of our friends’ status updates we see. Their algorithm, EdgeRank, carefully determines what we see or don’t see. EdgeRank uses a combination of affinity, “edge weight,” and timeliness to make a decision on whether or not to show you an update. Affinity grows when you interact with people, photos have more edge weight than text updates, and recent updates are ranked higher.

Theoretically, that determination is made in Facebook’s estimation of your best interest. But if Facebook were making money by force-feeding potentially irrelevant messages to users, it would be to Facebook’s economic advantage to reduce the efficiency of your ability to communicate with friends.

That conflict, however carefully managed, could cause problems. Even the appearance of inappropriate ranking would be a big black eye for Facebook. However, Facebook has successfully managed to integrated branded and paid content on other parts of the site without users’ revolting, so time will tell if this feature would actually cause a widespread negative reaction.

3. Counter to the company’s social philosophy

Perhaps most important of all, Facebook is predicated on a social philosophy of connecting people. Mark Zuckerberg said it himself in the Facebook IPO documentation, wherein he wrte, “Facebook was not originally created to be a company. It was built to accomplish a social mission – to make the world more open and connected.”

He continued, “At Facebook, we build tools to help people connect with the people they want and share what they want, and by doing this we are extending people’s capacity to build and maintain relationships.”

I don’t see how those statements are compatible with charging users to send their status updates to friends.

Facebook was built to connect friends, help them share updates, and enable them to build and extend meaningful relationships. Making people pay for the privilege now seems to fly in the face of that mission.