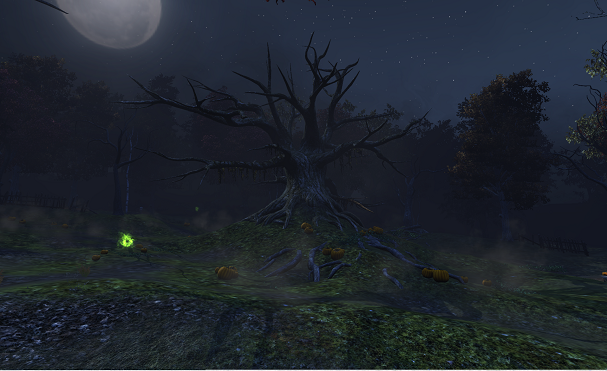 "Every town has its dark side."

I sigh inwardly. Sherriff Helen Bannerman’s show-script monologue barely budges my stony composure. An occupational hazard: In The Secret World, every conspiracy theory and tinfoil tirade exists. As a sort of decrepit proof-of-concept, hordes of rotting zombies circle Bannerman’s station, gnashing and clawing at the ramshackle barricades like Bieberites at a concert. My employers warned me about the town of Kingsmouth. Then again, any organization heeding the slogan "Sex, Drugs, and Rockefeller" probably values life somewhere between "negligible" and "ha ha ha, no."

I work for the Illuminati. Its notion of a recruitment drive involved sending an achingly hip New Yorker into my apartment after I totaled the joint coughing up energy balls. I’m already a light sleeper, but the mutated firefly soaring into my mouth wasn’t fair play in the slightest. Sure, I’m a walking Hoover for supernatural energy now, but Mr. Chic-tastic totally knocked my self-esteem out of the park. What a night.

That gets me thinking: The Illuminati has a funny visibility policy. Its dogma preaches the esoteric, but its work uniform trades wingtips for Wachowski. The threads my handlers threw at me ground stiletto heels into the term “fashion sense” with absolute cruelty. I look like a shorn Hugh Jackman cosplaying Heat’s Pacino — which, actually, is kind of cool. I ask about armor; they laugh and say Kevlar is so we-don’t-care ago. Clothing is entirely cosmetic in The Secret World.

So, Kingsmouth.  A slice of New England heaven…that is, until the unholy combination of a mysterious fog and a sedentary Americana populace turned that slice into rotten fondant. Bipedal mushroom-men, zombies, and crab-walking corpses choke both the countryside and neatly patterned roadways, so the old trope of sticking to civilization falls flat on its unrealistic face. The Illuminati is curious about the fog’s origin. Actually, I’ll say very curious. Information gets the royal treatment around here. 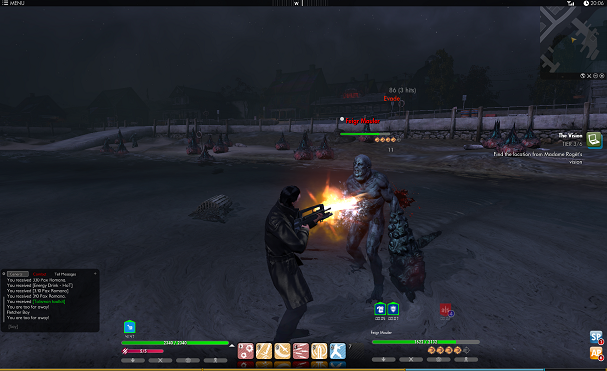 My task involves a straightforward jaunt to the docks in a not-so-straightforward probe on the fog. The shamblers and moaners along the way present perfect pincushions for my assault rifle and clawed fist weapon combo. Combat entails firing off abilities and eyeballing a cooldown bar; this is still a massively multiplayer game, after all.

As I slay my way across Fucked-ville, earned experience bestows ability and skill points spent on the almighty Ability Wheel.  Consider it a mandala of self-improvement: points purchase abilities tailored for ranged and melee methods of destruction. Every single ability is on the shelf in The Secret World, and a percentage counter in the middle of the wheel gleefully prophesizes forthcoming candle-burning bender sessions.

Arriving at the docks, I’m smacked by an amalgamation of comic-book pulp and science-fiction stimulation. Seriously, I’m literally smacked by a mass of wrinkles and calcified flesh called a Feigr Mauler, or “Smurf” according to locals not fixing their own problems. Think Old Man River swapping an arm for a giant barnacle and jumping into a vat of salt. I restore the lead content in his bloodstream with a few rifle bursts, and he sinks into the poisoned waters with a loud gurgle. 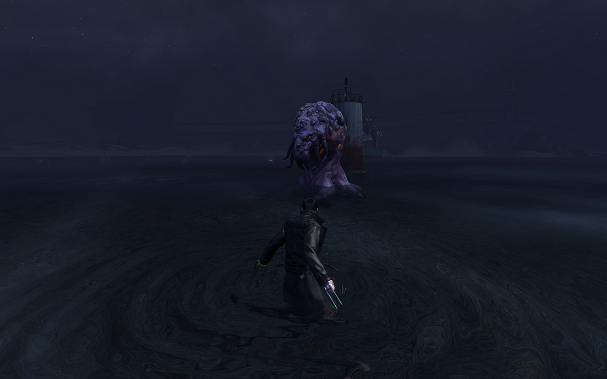 Fights espouse heavy movement in The Secret World, as monsters enjoy frequently casting directional area-of-effect attacks. As an enemy charges an attack, a white circle appears on the ground in the direction the pain will go. Running out of the killzone keeps me unscathed and throws in a little boost of excitement to normally static MMO scraps of duking it out in a standstill.

Wading farther from the shoreline, I spot another monstrosity heaving itself out of the mists: a Feigr Lord. It’s a blob of corpulence wrapped in Barney-purple skin, but before my first compliment escapes my mouth, it’s already flinging toxic sludge at my face. I give the Lord its space while it handles its runny nose problem; the Illuminati didn’t kill off my courtesy, after all. A couple of hundred bullets and a few grunting noises later, and the Lord regally topples over.

I return to the Sherriff’s station and find my efforts barely scraped the surface of what lies beneath Kingsmouth. Missions and queries detailing the roiling underbelly of this once-idyllic town appear at every turn, but I’m primed. Underneath even that, The Secret World beckons to the inquisitive and the adventuresome, and Kingsmouth’s new denizens herald a climactic conflict eons in the making.