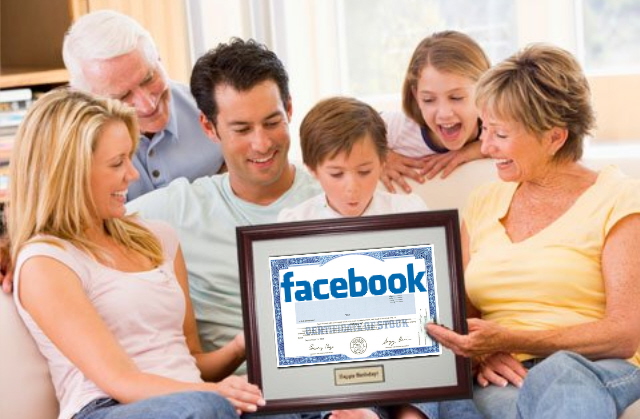 “When my kids were born, my dad bought them Disney shares, and we framed them and hung them up on the wall. They’re excited to know that they are a part of Disney.”

Mike Jones, MySpace’s onetime CEO, told VentureBeat that story a few months ago when we asked him if he planned to buy Facebook stock.

“People will just want to own the stock,” he said. “People will log into E-Trade and buy Facebook stock because they love it and use it everyday.”

Buying a nominal number of Facebook shares as a novelty or to “be part of” the company’s history might be the latest social media trend. The company is going public at the end of next week, and the web is buzzing with opinions and early decisions about the IPO.

While financial heavy-hitters and tech experts are loudly sounding their Facebook-stock-buying plans and giving the proletariat voluminous opinions on how much to buy (and when to sell), normal Facebook users are eyeing the stock in the same way you’d eye a tchotchke in a gift store window at your favorite zoo or theme park. It’s a memento of the day, a reminder of a time and a place when so many memories were made on this one social network.

To Buy or Not to Buy?

Days away from its IPO, Facebook faces an FTC probe

Here’s how much WE would pay for Facebook stock

Tech PR pro Brian Kramer said the thought of buying a couple of Facebook shares “has actually crossed my mind, just to see what shakes out.” He continued that he’d be making the purchase as a “novelty for now, but you never know.”

“You never know” seems to be something of a theme among these casual traders. Twitter user @uberfuzzy told us he planned to buy a few shares “first as a novelty (and to get the financial docs), possibly more later for investment if they don’t MySpace themselves.”

Most normal Facebook users won’t be buying any shares, but the what-the-heck buyers are almost equal in number to those planning to buy for long-term investment or short-term gains, according to our own limited man-on-the-street polls.

Shares of Facebook stock are likely to enjoy a quick value growth spurt, especially in the first few days and months of trading. Analysts are comparing this IPO to Google’s in 2004. Google’s share price started at $85 and currently sits at around $600, with the company recently announcing a stock split.

If Facebook’s stock follows the same trend, these just-for-fun shares could increase their value many times over, potentially ending up worth hundreds of dollars within a few years. One or two shares alone won’t pay anyone’s tuition; still, it’s a fascinating timestamp of the moment when nearly a billion people gathered online at the most important social destination in the world: Facebook.

Facebook is scheduled to makes its debut on the Nasdaq Friday, May 18, 2012. Shares will start selling in a price range between $28 and $35, but prices are expected to rise dramatically and quickly.