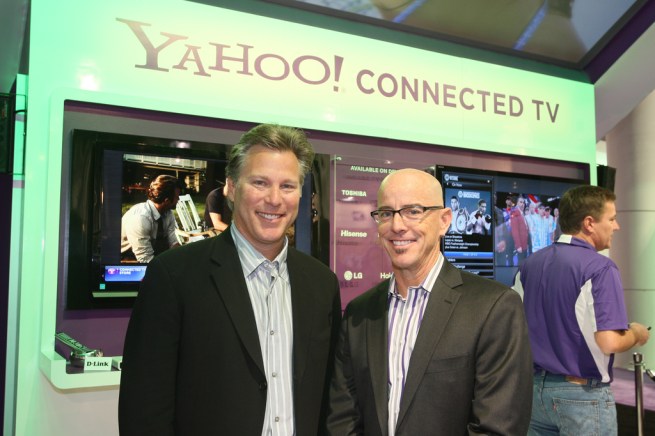 After an aggressive reign that ended in a sordid résumé scandal, Scott Thompson, just four months into his job as CEO, is out at Yahoo. Intermin CEO Ross Levinsohn, appointed to the position Sunday, is already in communication with Yahoos about the regime change.

“We have just announced very significant news regarding the leadership of our Company,” Levinsohn said in an email message, obtained by VentureBeat, that went out to all Yahoo employees Sunday afternoon. “The Board of Directors has appointed Fred Amoroso Chairman of the Board and has asked me to take on the role of interim Chief Executive Officer, to replace Scott Thompson, who has left the Company.”

Just over a week ago it was discovered that Thompson had padded his résumé with a computer science degree he did not receive. The fictitious degree, uncovered by activist shareholder Dan Loeb of Third Point, somehow made it into legal filings with the SEC. Yahoo and Thompson botched communication around the error, causing a fall-out of epic proportion that ended today with a shamed Thompson exiting the company.

Levinsohn, pictured on the left (with the hair) with former chief product officer Blake Irving, asked staff to “focus on the momentum we’ve created over the last few months,” and painted today’s news as the end of high-level upheaval at Yahoo.

“Importantly, today’s announcements lay to rest the unfortunate and serious distractions surrounding our senior leadership and the composition of our Board going forward,” he said. “Today’s announcements really boil down to this: following these changes, a transformation and renewal at the Board level that began in August of last year is now complete.”

Levinsohn, who was heading up global media initiatives for Yahoo, joined the company in late 2010 and was considered by many to be a CEO candidate after Carol Bartz was fired. He previously served as the president of Fox Interactive Media, a News Corporation-owned entity. According to his Yahoo bio, Levinsohn has a Bachelor of Arts in Communications from The American University.

Oddly the letter, the first internal confirmation of Thompson’s exit, was only sent out to Yahoos after the company had announced the leadership changes in a press release.

We’ve included the entire message below.

We have just announced very significant news regarding the leadership of our Company. The Board of Directors has appointed Fred Amoroso Chairman of the Board and has asked me to take on the role of interim Chief Executive Officer, to replace Scott Thompson, who has left the Company. In addition, the Board also announced that it has reached a settlement with our major shareholder Third Point LLC, enabling us to avoid a proxy contest.

As a part of the Board’s agreement with Third Point, Daniel S. Loeb, Harry J. Wilson and Michael J. Wolf are joining the Yahoo! Board. In connection with their addition, the members of our Board who were not planning to stand for re-election have decided to step down immediately to accelerate the leadership transition for the new Board in advance of the annual meeting. We’ve attached the press release outlining all of these changes for your review.

Importantly, today’s announcements lay to rest the unfortunate and serious distractions surrounding our senior leadership and the composition of our Board going forward. I know that Fred and the new Yahoo! Board are looking forward to working constructively to stabilize the leadership team and to further accelerate the progress we have made in reinvigorating Yahoo!, executing against the Company’s strategic initiatives and enhancing stockholder value.

For my part, I want you to know that I am honored to lead this great company as interim Chief Executive Officer, and I accept that responsibility with enthusiasm and confidence for three reasons above all others: As I have said since I joined Yahoo in 2010, I believe in the tremendous strength and value of our brand, and in our relationship with our users and partners; I believe in the substantial organizational, operational and strategic progress we have made in recent months in spite of the internal and external challenges we have faced; and most of all, I believe with all my heart in all of you and your dedication to continuing to make this company great. What we achieve in this company is substantial on each and every day, on a scale rarely matched across the globe. I’m incredibly proud to be a part of this team.

This may seem like a great deal of news to digest, but as you are all keenly aware, Yahoo! is a dynamic, global company in a dynamic, global industry, so change — sometimes unexpected and sometimes at lightning speed — is something we will continue to live with and something we should embrace. However, today’s announcements really boil down to this: following these changes, a transformation and renewal at the Board level that began in August of last year is now complete.

Of course, these changes will also raise new questions along with those it answers. I invite you to bring those questions to me, or any member of the executive leadership team, and we will answer them as forthrightly and promptly as we can. Please also look for an invite and plan to attend an all-hands meeting we are organizing for Monday afternoon – we look forward to speaking with you further at that time.

In the meantime, I know there is one thing we should definitely all be doing in light of this news, and that is to focus on the momentum we’ve created over the last few months. Many of you have heard me talk about the possibilities we have, and about the opportunities in front of us. In spite of the very bumpy road we’ve traveled, we are achieving genuine and meaningful successes in the marketplace every day and heading in the right direction.

You deserve at least as much from your leadership as you give. I take that responsibility very seriously and promise to give you my all while I’m serving as interim CEO.

I want to close by thanking you for your commitment to Yahoo! and your continued hard work. To be a Yahoo is to be resilient, and you are very much appreciated. Let’s go on the offensive starting today!