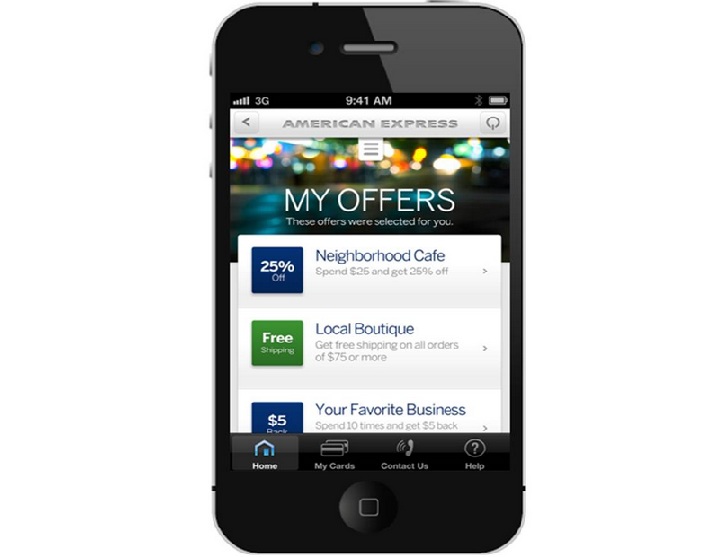 American Express is releasing a new version of its iPhone app today that lets users find offers at nearby businesses. The new feature, dubbed “My Offers,” represents a threat to Groupon, which has tried to entice merchants to market through its mobile product, Groupon Now. (Full disclosure: I have a very small stake in AmEx and a variety of short positions in Groupon.)

Since the new app shows AmEx wants to move beyond payments into performance-based marketing, it shows AmEx could also become a threat to companies like Google and Facebook.

For consumers, AmEx’s My Offers holds the promise of better targeted offers. The app uses a cardholder’s spending history (the “spend graph”) and location to determine the most relevant offers. For merchants, it offers the ability to reach new customers without discounting to existing customers. Merchants can choose to exclude consumers who have made a purchase at their business within the last year from a promotion.

Cannibalization of existing full-price customers is one of the biggest reasons Groupons can be unprofitable for small businesses. Targeting is, in general, a much better approach to discounting than blanket discounts, and using transaction history is one of the most effective ways to do it.

Merchants can also choose to extend the offer to everyone on the network or create loyalty-based offers for repeat customers. That’s a level of targeting that hasn’t typically been available to small businesses.

Most of AmEx’s offers to date have been focused on national merchants. “It’s time now to get into helping more of the local merchants and to make sure that we have the tools that work for them,” said Ed Gilligan, vice chairman of American Express. “It’s a very cluttered space for small merchants, and we want to make sure we’re learning and that this works for them.”

“It’s less about trying to say can we do a Groupon Now or replicate what someone else is doing,” Gilligan said. “It’s more of a continuation of what we started, which is connect cardmembers to the right merchant. And help both.”

Because the processing of the discounts happens on the back end by AmEx’s computers, there is no staff training required for local merchants. That’s often an obstacle to running deals. On the consumer side, the consumer just has to swipe the card to pay; there’s no coupon or paperwork required.

“We made the decision that we didn’t want price to get in the way of small merchants starting to get involved,” said Luke Gebb, VP, global network marketing. “Where we are now is just trying  to attract as many small businesses as possible, prove that we can add value to them.”

The company expects to launch an Android app eventually but hasn’t announced timing on that yet.

“If, over time, [small merchants] want to go to more of a yield management system, we will adjust and adapt with them,” Gilligan said. “We wanted to launch with tools that are pretty simple to use.”

In addition to seeing offers from the AmEx app, consumers will be able to see offers that have been loaded onto their cards via AmEx’s partnerships with Facebook, Twitter, and Foursquare.

Although the technology and the thinking behind it is exciting, it’s a challenging problem that requires winning the attention of both consumers and merchants.

To date, there really hasn’t been much reason to download the AmEx app. The functionality has focused primarily on account servicing: viewing transaction history, looking at Membership Rewards points, and paying bills. These are relatively infrequent tasks that many accomplish on the Web. Adding offers to the app will give users another reason to download.

If it saves me from seeing yet another ad for laser hair removal, I’m all for it.