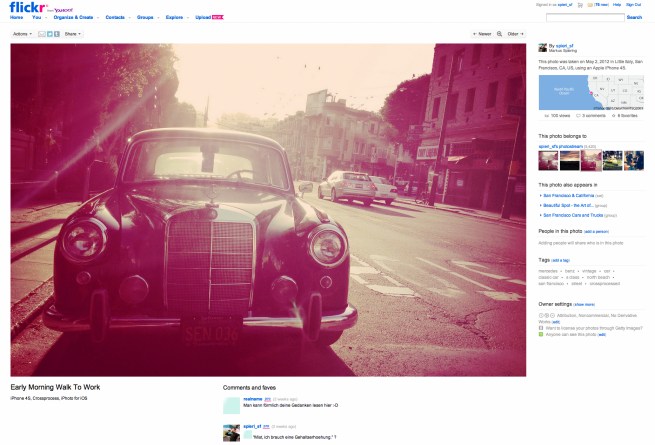 Yahoo’s Flickr photo-sharing community has been in makeover mode of late and is getting incrementally better with subtle upgrades. Tuesday, Flickr released a reworked photo page layout with a new look that’s nearly impossible to miss — especially on large displays.

Flickr’s “liquid” layout, as it’s called, is a dynamic format for each photo page that now features newly supported hi-res images on the main photo page. The layout also automatically adjusts the photo page and image size based on the user’s browser window size to feature the biggest photo size appropriate for each photo viewer.

“Flickr is known for its outstanding image quality that enables people to showcase the amazing details of their photographs,” Flickr’s head of product Markus Spiering told VentureBeat. “With our new, larger hi-resolution images and liquid design each photo page on Flickr comes alive.”

The new liquid layout is powered by an algorithm that accounts for browser width and height size, and displays content at a width that will best showcase the most common 4:3 photo ratio while also ensuring the photo title and sidebar are visible on the page, engineer Ross Harmes explained in a blog post on the technology behind the update. The algorithm also favors native photo sizes, never upscales images, and should allow for faster page load times.

The layout ultimately makes for an enriched new way to browse photos on Flickr, especially on large displays, and represents Yahoo’s renewed commitment to the photo property it let languish for far too long (we’ll have to wait and see how Flickr fits into interim CEO Ross Levinsohn’s plan for beleaguered Yahoo). But it might be too little, too late to win back or attract photo-sharers who’ve migrated to Facebook and mobile apps such as Instagram. For consideration: Flickr members upload 3.5 million photos per day; Facebook members upload 300 million photos per day.

The liquid layout featuring hi-res images has been pushed live for all Flickr users. The new photo sizes have also been added to Flickr’s API and now appear in the “All Sizes” menu.