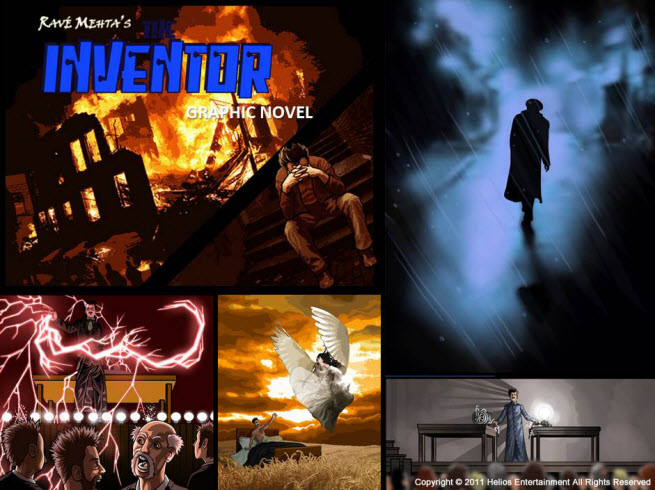 When we last checked in with Helios Interactive, it was creating GameCore design tools for cross-platform games. But the division of a big transportation company, Mehta Group, got run over by Unity Technologies, a rival maker of 3D game tools. 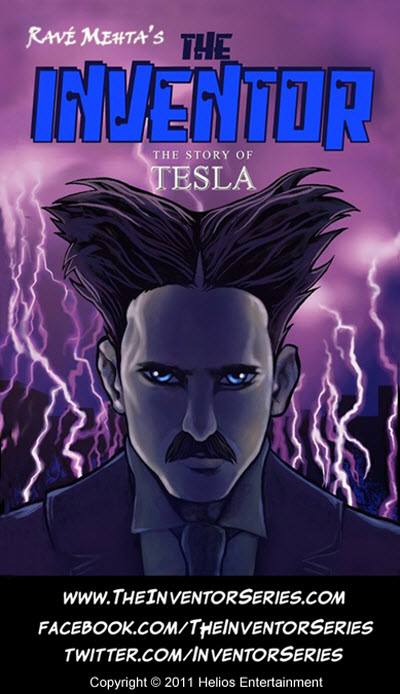 “Unity exploded, and I felt like that was a losing battle to take them on in game development tools,” said Ravé Mehta (pictured at bottom), chief executive of Helios Interactive, in an interview with GamesBeat.

So now he has pivoted in a new direction, and he hopes it will be just as innovative. He has created a sister division, Helios Entertainment, that is using those game tools to produce internal, multi-platform interactive media. The first project is a graphic novel-like non-fiction story, a 150-page comic book called The Inventor, about the life of late 19th-century scientist Nikola Tesla. If The Inventor takes off, it could become a game world, an app, and possibly a movie; in effect, it could become a “transmedia” entertainment property.

“We are testing the concept to see if it will catch on, and then we will take it across multiple platforms,” Mehta said. “It’s a personal passion of mine because Tesla is one of my heroes.”

Tesla is known in Silicon valley as one of the greatest engineers who ever lived. A contemporary and rival of Thomas Edison, Tesla came up with innovations such as short-range wireless communications and alternating current electricity. But in contrast to Edison, whose work led to the formation of the great company General Electric, Tesla’s contributions fell into obscurity until recently.

These days, Tesla has seen a resurgence in popularity among engineers, and Mehta wants to ride that wave. He notes that there are more than 2.75 million Google searches a month about Tesla, compared to about 3.25 million for Justin Timberlake.

Larry Page, chief executive of Google, has mentioned Tesla as an inspiration, and VentureBeat’s own innovation award at its MobileBeat conference is named after Tesla. Nvidia named its graphics card division after Tesla. Mehta thinks Tesla ought to be more popular, and he wants to contribute to the resurgence.

The Inventor comic book doesn’t have blood and guts. Rather, it is a more adult tale that highlights the tension between Tesla and Edison as well as financier J.P. Morgan.

Over time, Mehta hopes to turn The Inventor series into stories about mystical inventors throughout history, particularly the forgotten ones. Helios Entertainment has partnered with comic publisher Arcana to release the graphic novel, which includes six episodes, this summer. The release will be timed for the ComicCon 2012 convention in July. 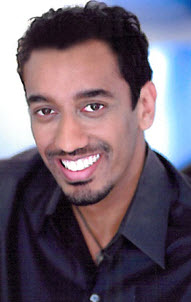 “We’ll leverage the game brand into multiple social platforms and mobile devices,” Mehta said. “Many films start out as top-down efforts, with the movie coming first. We’re starting from the bottom up, testing the idea as a relatively inexpensive comic book before we invest more heavily.”

This is similar to Marvel’s approach with its superhero characters, who have only in the last 10 years or so starred in numerous, Hollywood studio films after decades of only appearing in the pages of comics and children’s cartoons. Mehta said the company is in talks with various potential partners to expand The Inventor series.

Mehta has funding from the company’s parent firm, and Helios Entertainment has eight people working for it now. If the game world and other media move forward, the company will hire more people.

“We want to create a game world that will educate, absorb and empower people,” Mehta said.