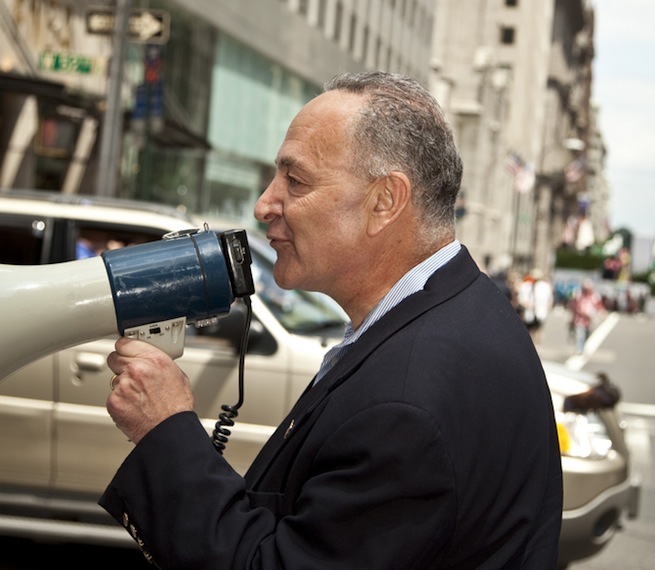 Saverin has been taking quite a bit of heat over dropping his citizenship, which was announced coincidentally just weeks before Facebook goes public. Many viewed the action as a way for him to save an estimated $100 million on taxes, a sentiment Saverin denies, as VentureBeat reported yesterday.

The plan, put forward by Senators Charles Schumer (D-NY) and Bob Casey (D-Pa.) is called the “Ex-PATRIOT Act” (Expatriation Prevention by Abolishing Tax-Related Incentives for Offshore Tenancy Act) and seeks to bar people like Saverin from reentering the U.S. after they’ve renounced their citizenship to avoid heavy taxation. While I understand how it could be upsetting that some people don’t value their citizenship despite everything the U.S. offers, deciding to block them from ever visiting the country is just asinine. The goal is to compel the super rich to continue paying taxes, not excommunicate them. (See update below with more details on the bill.)

In dramatic political fashion, Schumer’s office labels Saverin’s renouncement a “scheme” and tries to bring a sense of urgency to the matter due to the recent news. What’s funny about this move is that its anything but urgent. Saverin filed the paperwork to give up his citizenship in January 2011 but was only approved the following September.

Also, people giving up their citizenship to avoid paying taxes is not a new concept. As my fellow staffer Jolie O’Dell previously pointed out, filing taxes as a U.S. citizen while living abroad can be an expensive and complicated nightmare. Nearly 1,800 people renounced their citizenship in 2011 to avoid having to deal with those taxes.

Generally speaking, Schumer does some really good things with his power, such as trying to speed up the adoption process for sweet German Shepherd dogs that have served in the military. But when it comes to the “Ex-PATRIOT Act,” it seems like little more than banging pots and pans for the sole purpose of grabbing attention.

The senators are scheduled to explain their Ex-Patriot Act plans later today. We’ll update the post with any interesting bits from the press conference.

Update 5/17/2012 – 9:08 a.m. PST: The senators just wrapped up the press conference, offering up some additional details about their proposed legislation.

Under the proposed bill, expatriates with either a net worth of $2 million or an average income tax liability of at least $148,000 (over the last five years) will be presumed to have renounced their citizenship for tax avoidance purposes. Any person who fits this description does have a chance to appeal to the IRS to prove they aren’t just dodging taxes.

Anyone who the IRS determines was indeed dodging taxes by renouncing citizenship will be slapped with a new tax on all future investment gains — no matter where he or she resides. The senators said this stipulation would eliminate any tax benefit/financial incentive associated with renouncing one’s citizenship. Also, the rate of the new capital gains tax will be 30 percent, which is consistent with the current rate applied on non-resident aliens for dividends and interest earnings.

“Mr. Saverin has decided to ‘defriend’ the United States of America just to avoid paying his taxes. We aren’t going to let him get away with it so easily,” Schumer said. “It’s infuriating to see someone sell out the country that welcomed him and kept him safe, educated him and helped him become a billionaire. This is a great American success story gone horribly wrong. We plan to put a stop to this tax avoidance scheme. There should be no financial gain from renouncing your country.”

“We simply cannot allow the ultra-wealthy to write their own rules,” said Senator Casey. “Mr. Saverin has benefited greatly from being a citizen of the United States but he has chosen to cast it aside and leave U.S. taxpayers with the bill. Renouncing citizenship to simply avoid paying your fair share is an insult to middle class Americans and we will not accept it.”