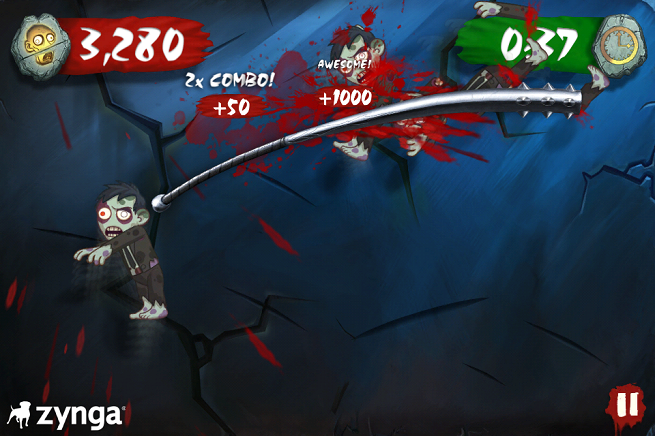 “I’m about the furthest you can get from a ‘normal’ game-maker’s path. I used to study molecular biology and computer science after getting a PhD in Bioinformatics.”

That earned a double take. In a small meeting room tucked away within Zynga’s mammoth corporate headquarters, I’m listening to Game Doctors co-founder Matthias Höchsmann debuting Zombie Swipeout, a “spiritual successor” to last year’s castle-defense title ZombieSmash for the iPhone. His origin story, like most indie-cum-successful-developers’, stands out as an intriguing journey.

Höchsmann isn’t researching microorganisms with brain-busting names anymore, but his newest venture on the gaming front brings just as much brain-busting in a different form. Swipeout’s objective marries simplicity with replayability: Slice and chop up as many tumbling and falling zombies across the screen as possible within 75 seconds using swipe gestures. Chaining kills nets combo multipliers, a higher score, and an ever-increasing fresco of blood graffiti in the background.

Ostensibly, ZombieSmash hero Joey occasionally succumbs to his urges of hurling himself airborne in the midst of the undead-blending shenanigans. Thankfully, his green don’t-kill-me aura and expression of mortified horror signifies his appearances. If you still manage to cut into Joey’s fun — as I did multiple times — you’ll need to revive the plummeting protagonist with a limited-use medpack or send him six feet under which sends you to a game over. 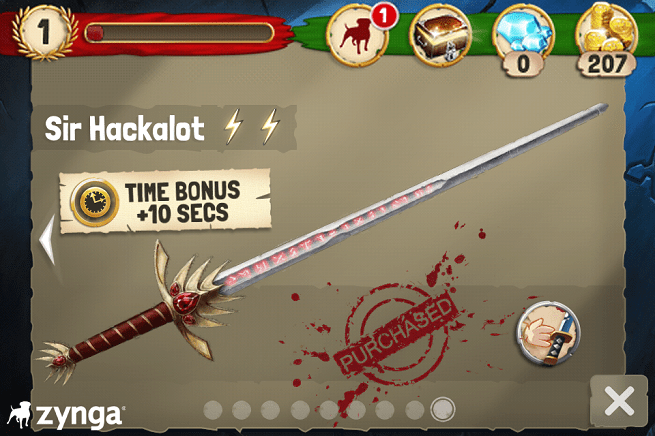 I enjoyed the challenge of tracing hasty, elaborate swipes around Joey to nab zombies and coins, but his knack for appearing just as I’m tying off a 6-chain combo convinces me he’ll never make it in badly choreographed Broadway productions. “There’s just one rule: Don’t hit the good guy,” Höchsmann advises.

The obvious mechanical similarities between Swipeout and Halfbrick Studio’s Fruit Ninja exist in plain sight, but Höchsmann believes Zynga’s powerful social presence adds “an additional layer of complexity” to the game. Weekly tournaments with friends (invited via Facebook or an in-game code) keeps the competition flowing with trophies, score comparisons, and leaderboards. Racking up victories powers a leveling system, where the evergreen drive for higher scores continues the adventure.

Ultimately, Zombie Swipeout presents an entertaining dance with the undead in a small, mobile package. The game is currently only available in Canada for the iPhone and iPod Touch systems, but Zynga plans a worldwide release soon.