Mark Zuckerberg and his current employees aren’t the only ones making it big in Silicon Valley today. Former Facebook employees who have struck out on their own and started companies — referred to as the Facebook Mafia — have collectively raised a total of $271 million in funding since 2006, according to a report from venture capital database CB Insights.

In the first five months of 2012, Facebook Mafia companies have raised $130 million. That translates to a 137 percent increase over 2011’s funding totals. 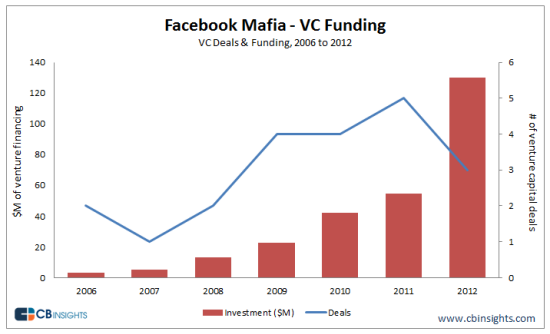 Greylock Partners, an early investor in Facebook, has invested in three startups founded by former Facebook companies, making it the most active VC for the Facebook Mafia. Other Facebook Mafia investors include big names such as Benchmark Capital, First Round Ventures, and SV Angel. CB Insights reports 67 different investors have given capital to at least one Facebook Mafia company.

Now that Facebook has begun trading on the public market, you can bet there will be more Facebook employees cashing in and starting their own companies. If the funding growth from 2012 is any indication, investors will be keen on throwing more money at startups that emerge from the hacker-focused company.