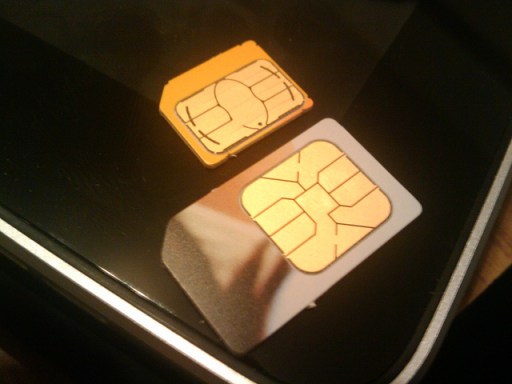 A back room battle has been raging in recent months over the future of something very small:  the nano-SIM, a smaller SIM card design that would allow phone makers to fit more hardware in their increasingly thin devices.

For the vast majority of smartphone users, the shape of their phone’s SIM cards is not something of any real, pressing importance. But for Apple, Nokia, RIM, Motorola and the rest of the European Telecommunications Standards Institute (ETSI), it’s vital.

As exhaustively detailed by The Verge, the debate over the design has been split on a number of points, but one most significantly: Companies like Nokia were adamant about the design having a “push-push” mechanism, which would allow the card to eject once pushed.

Apple, on the other hand, uses a SIM tray design in its devices, so it has no need for such a design. That, along with its desire to keep the new design compatible with previous ones, explain most of Apple’s design decisions.

The central problem is this: Having two SIM card standards floating around is not something anyone wants.

So, as a result, compromise: The new design, proposed yesterday by RIM and Motorola, features elements that are 80 percent Apple’s and 20 percent RIM’s and Motorola’s — an ironic metaphor for the smartphone space that shouldn’t go unnoticed. Essentially, the new design takes most of the elements from Apple’ own and adds the “push-push” mechanism.

Most of the ETSI momentum is going in Apple’s favor, though we will find out which way the group votes when it meets later this month.