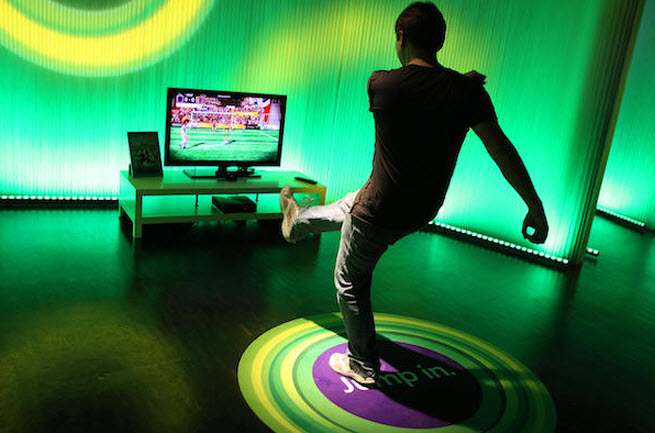 Microsoft’s Kinect has always held out tantalizing promises. As a user interface, it brings computing devices to the edge of greatness but falls just a little short of our dreams of the Star Trek holodeck or the cool transparent, gesture-controlled computer that Tom Cruise used in the sci-fi film Minority Report. You can fantasize about being a Jedi Knight in Kinect Star Wars…until the system fails to recognize your lightsaber attack and you get pummeled instead.

But imperfect as it is, Kinect is slowly but surely expanding beyond its casual audience of former Wii fans to the hardcore gamers. New Kinect games that have appeared or will appear later this year are targeting the hardcore. But people like me are pretty picky when it comes to their gaming experiences. A slight delay in recognition of a gesture or an inaccuracy in parsing a verbal command can ruin the experience for us.

Microsoft’s Kudo Tsunoda, creative director for Kinect, said in an interview that the accuracy and fidelity of Kinect are getting better, and developers are learning how to craft good experiences around what it is capable of doing.

“It’s great to see stuff showing up in more hardcore genres,” said Tsunoda. “And I think the way that people are using it in their experiences really shows the breadth of what Kinect can do. It enables, I think, creative people to use Kinect in a way that really enhances their experiences in a meaningful way for people who love their franchises.”

Recognizing the accuracy problems with Kinect, game developers are learning how to craft experiences that use the system in a way that allows for errors. Electronic Arts’ BioWare division didn’t use the motion-sensing system in Kinect for Mass Effect 3, but it did tap the voice-recognition system so you could issue combat commands to two squad companions.

“Kinect is a pretty sophisticated and impressive piece of hardware,” said Casey Hudson, executive producer of Mass Effect 3. “When it first came out, a few of us at the studio either got one or had a chance to play with one, and it was pretty cool.  Beyond that, because it has a few different abilities, it makes you think about how they could be used in the games you’re making.  As we discussed those possibilities, we got excited about the chance to integrate it into Mass Effect 3.”

The voice commands were a great fit with the tactical squad gameplay, and they use a lot less memory than motion-sensing commands, Hudson said. It took about nine months to integrate the voice commands into the game. They worked right away but needed refining and localization to make them work with multiple languages. In case the system doesn’t recognize your command (particularly in scenes with a lot of noise and music), you can always fall back to using the game controller. So the failure isn’t catastrophic for the game experience.

“The biggest lesson is to make sure the player has options,” Hudson said. “We saw enough positive reaction that we’ll consider it in future titles.”

Inspired by Mass Effect 3, Ricky Gonzalez (a developer at Bethesda Game Studios) modified The Elder Scrolls V: Skyrim to enable voice commands for things such as navigating through inventory or casting “dragon shout” spells that show off impressive special powers. He got the bare bones working, and then Bethesda decided it was interesting enough to assign a small team to it. Over a couple of months, they created the full set of features. Now you can issue around 200 different voice commands in the game that simplify what can be an otherwise unwieldy user interface.

Coming down the road is Capcom’s Steel Battalion: Heavy Armor, which makes use of both Kinect gestures and controller commands. In the game, you serve with a crew in tank-like Mech in an alternate-history version of World War II.

Kenji Kataoka, who heads the team at Capcom, said that he knew Kinect could be used for his game when he first saw the demo of Project Natal (the code-name for Kinect) years ago. His team worked on integrating Kinect and the controller to command the big Mech for the past three years. They worked closely with Microsoft researchers and studied the behavior patterns of 200 people to get the gestures for the game right. The trick, Kataoka said, is detecting your “intentions and coordinates of your gestures.”

He added, “At first people didn’t know how to react or grasp the concept itself. Then came the skeptics who were unsure about it or didn’t believe it would work. Now we are seeing the enlightened and believers. What we mustn’t forget in any immersive game, though, is that it requires some work from the player as well — be it imagination, adaptation, or certain role-play.”

Microsoft’s own major Kinect game, Fable: The Journey, has also been in the works for a long while at the company’s Lionhead Studios division. Tsunoda said that title uses a full range of Kinect capabilities, and it will have good fidelity upon launch. The popular reception of this game may determine whether Microsoft commissions further, similar projects.

Microsoft has still more unannounced Kinect games waiting in the wings. So far, we haven’t seen the spectacular, break-out success like we did with Wii Sports on the Nintendo Wii in 2006. That title introduced us all to motion-sensing games. Kinect has extended our interest. The Star Trek holodeck isn’t quite here yet, but Tsunoda thinks we’ll get there.