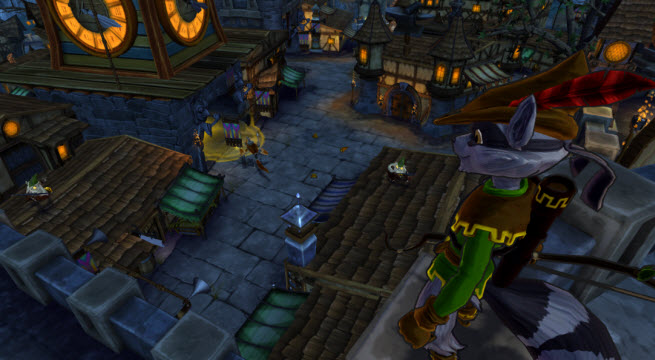 Sony has been revealing layer after layer of Sly Cooper: Thieves in Time. The game is coming this fall to the PlayStation 3 and the PlayStation Vita, and developer Sanzaru Games is banking on reviving the franchise for a new generation of fans.

It won’t be easy to do that, as platform games have been having a hard time winning over new audiences. But this exclusive for the PS 3 is definitely the kind of title that Sony needs to set the PS 3 apart, and it offers some much-needed variety for fans of cartoon-like comic adventure stories. I saw a preview of a level at an event in Santa Monica, Calif.

The game stars Sly Cooper, an anthropomorphized blue raccoon and a crafty thief. The game play requires skillful stealth, thievery, and exploration. The title has morphed from its predecessor platform games into a full-fledged action-adventure game. As Sly, you sneak around and navigate obstacles to retrieve the history of the Thievius Raccoonus, which has been lost. Sly uses a time machine created by his cohort Bentley to recover the missing book.

“I’m hoping we can get a new type of player that normally wouldn’t play this type of game,” said Mat Kraemer, lead designer, in an interview with GamesBeat. “We’re making the game more epic. It’s very challenging. If we can reach that larger audience, it would be really great.”

Sly has to make a lot of acrobatic moves such as navigating tight ropes while dodging flaming cannon balls at the same time. In this game, Sly can wear clothing that gives him abilities, like a suit of armor that allows him to deflect projectiles. He can also fire rope lines that he can swing down.

The level I saw was several times bigger than those in previous installments. In this stage, Sly Cooper’s love interest and police pursuer, Carmelita Fox, is a fully playable for the first time in the series. In one scene, she follows Sly’s ancestor, Sir Galleth, who tries to take on a crazy three-headed dragon on his own. Carmelita also has to take on this dragon in a fight.

The three-headed mechanical dragon is huge, and it’s typical of the big bosses in the game. To take down the dragon, you have to take out the little creatures it spawns and then block the projectiles it sends at you. Then you have to stun the dragon and climb on top of it and take out its eyeballs. It takes a lot of button-pushes to accomplish this.

Other new foes included a tiger named El Jefe. All of the original voice actors for the series are returning. You can look forward to seeing new material for the game at the Electronic Entertainment Expo (E3) in June, Kraemer said.

The cool thing about playing on the Vita is that you can play the same game, save it to the cloud on the PlayStation Network, and then pick up playing at the same spot in your home on the PS 3. The development has taken a couple of years, but Kraemer says he’s enjoying every minute of it. 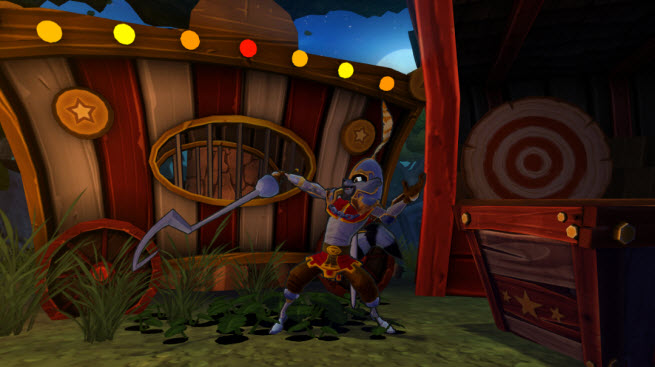