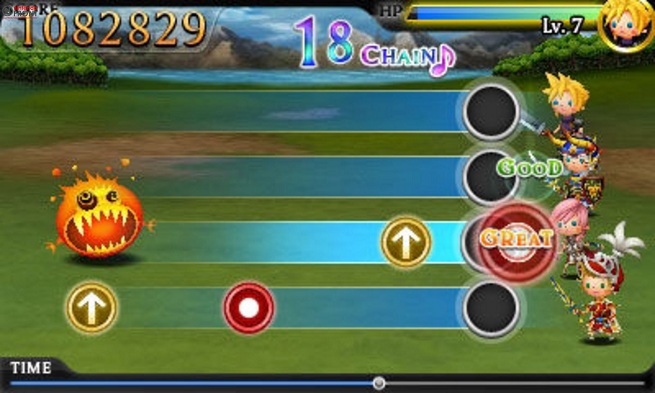 If you think of Theatrhythm Final Fantasy as an anthology to celebrate the series’ 25th anniversary, its existence doesn’t seem so puzzling. This upcoming Nintendo 3DS title from Square Enix takes two things the franchise is cherished for, memorable music and role-playing-game mechanics, and fuses them together. Don’t worry if that sounds a bit odd at first. From what I’ve seen of the game at a recent preview event in Los Angeles, Calif., I’d say it’s tuning up quite nicely.

Players can assemble a four-person team of their favorite protagonists from the past 13 major Final Fantasy installments. In challenge mode, these heroes visit musical stages based on the battles, fields, and major events from each title.

Instead of navigating menus in turn-based or active-time fights, however, you tap the touch screen and flick the stylus in different directions in time to a selection of classic songs. As you progress, like any other RPG, your team gains experience and levels up. Higher attack and magic attributes can make taking out iconic enemies and bosses easier while having a solid agility statistic is a must to get through the field levels.

Unifying the 13 games — that span across five console generations — is a cutesy, anime aesthetic from Japanese artist Monster Octopus. “Looking at all the FF characters, because each one is designed with a different artistic style, they wouldn’t be able to live in one game together,” said product marketing assistant manager Raio Mitsuno. “They’re going to clash in their look and style, so what we wanted to do with this game is to have something that feels coherent. It feels like they all belong in this one particular universe.” 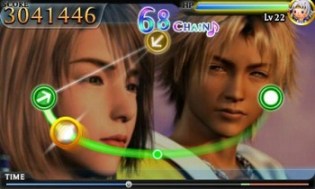 Of course, the game still borrows and features many of the graphics and cut-scenes from the originals for nostalgia’s sake. The songs, thankfully, are also in their authentic incarnations and are not remixes. Square Enix admits that they’re planning to offer downloadable tracks (potentially making this the first 3DS games with DLC), but they’re so far quiet on any specifics.

This doesn’t mean that players should worry about not having enough to do in Theatrhythm, however. The Chaos Shrine is where they’ll do some hardcore grinding and possibly develop light carpel tunnel syndrome trying to keep up. In this mode, the game throws together two random songs and difficulties (the combo referred to as a Dark Note) and rewards those who can best them with items, experience points, and extra unlockable characters.

Players can also take a specific Dark Note that they like, for perhaps the available reward or specific songs featured, and pass it around to others, using the 3DS Street Pass.

Square Enix has definitely put some thought into this 25th anniversary present for the longtime fans of the series (unlike Nintendo’s lackluster port of Super Mario All-Stars for Super Mario Bros. quarter-century birthday). The game serves as a nice way for the faithful to reminisce over each FF without having to dive back into the 40-plus-hour quests…or sit through some unfunny YouTube user narrate his playthrough.