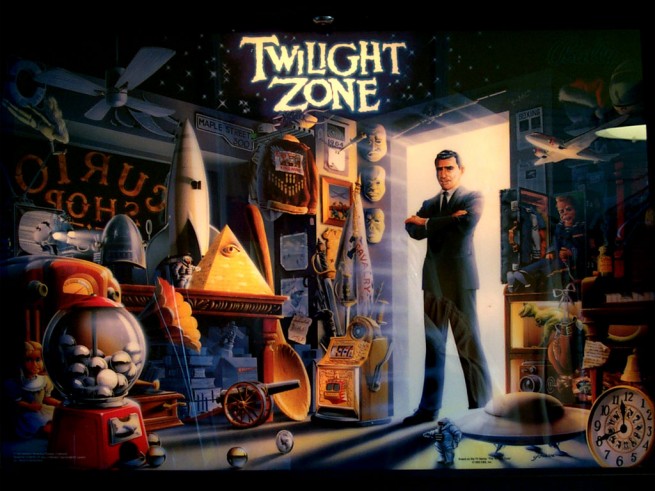 Pinball machines may break, and arcades may close down, but digital is forever. Now, FarSight Studios is looking to make the Twilight Zone pinball machine a part of eternity by adding it to the lineup of titles in its excellent Pinball Arcade (available on iOS, Android, PlayStation Network, Xbox Live Arcade, and PS Vita).

Just one problem: Licensing a popular and beloved table like that can be expensive, so the developer is looking to Kickstarter to fund this expansion to their already-great collection.

In addition to licensing the table from Bally, the original creator, the team must come to a financial agreement with the owners of the television show, the music, and the actors whose likenesses appear in the art. It all seems to add up to create an insurmountable hurdle that would prevent a machine like this from ever titling, flippering, or multiballing again.

But this is a table worth preserving. The Internet Pinball Database currently has Twilight Zone sitting atop its list of the best 300 electronic pinball machines.

This exercise is an interesting spin on the Kickstarter fad. Instead of using the platform to raise capital toward a new property, FarSight is hoping to tap into its existing fans to fund downloadable content.

As always, no one is expected to contribute without receiving something in return. The $10 level will provide access to the game on any single platform of the supporter’s choice. At $50, FarSight will include a custom wallpaper and enter the supporter into a tournament. Interestingly, the $100 level has a special version of the game that allows users access to the table operator’s menu. For information on additional levels, check the official page.

Unfortunately, thanks to this unorthodox payment method, Microsoft won’t allow the Xbox 360 version to be included as a Kickstarter reward, but the table will be released on the platform if everything gets approved.

To further spark interest, this round of crowdfunding could also bring the number-three game on the Internet Pinball Database list, Star Trek: The Next Generation, to Pinball Arcade.

“We would love to do the Star Trek: The Next Generation table. We know we can get the licenses because both [Star Trek and Twilight Zone] are CBS properties,” FarSight wrote in the frequently asked questions section of its Kickstarter page. “The cost of the licenses would be similar to the Twilight Zone, so an additional $55,000.”

We asked the studio if it would license both if this effort ended in more than $110,000 raised. FarSight Studios president Jay Obernotlte responded: “If we reach that goal, we definitely will.”