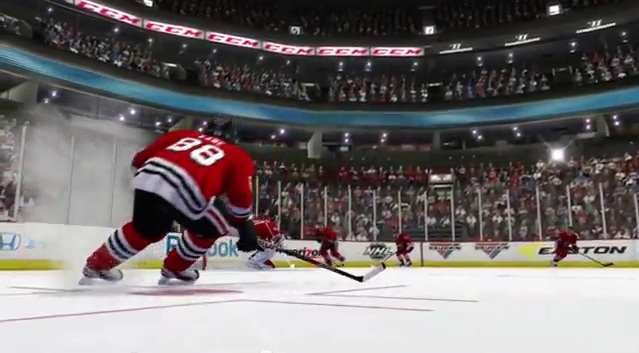 NHL 13 is skating on much sturdier ice than last year’s game. At a recent preview event at their Los Angeles, Calif. offices, Electronic Arts showed off some of the core improvements it’s implementing. The new physics system and smarter computer players bring some much-needed realism to the hockey franchise and make you wonder why EA Sports didn’t make these changes sooner.

To understand the significance of the new “True Performance Skating” system, first consider NHL 12. In that title, players could only move at one constant speed. They were also able to stop, change direction, and turn on a dime which made for an unrealistic flow to the action.

With NHL 13, the new physics engine (borrowed from the Fight Night series) makes all the difference. Now the player can have their skater take off with a burst of speed and then climb up to a faster pace. Keep in mind that going too fast will result in wider turns (unless they want to get more intimate with the ice). And working against the momentum of the completion can create strategic scoring opportunities. In short, the characters move a lot more like authentic hockey players and the user has a lot more creative control opportunities.

Another key improvement comes in the form of “EA Sports Hockey IQ.” Whereas in NHL 12, the computer opponents were solely focused on the puck, in NHL 13 they respond to and are more aware of the other players. EA has also added over 1000 new animations to the goalies, who now can move each of their limbs independently.

All of this adds up to making the latest NHL video game look and flow a lot more like the actual sport (and real life for that matter). EA Sports is shooting to release this title on September 11, 2012.