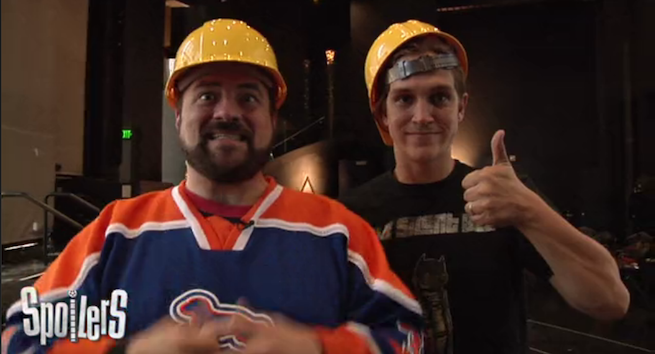 The summer season is usually when the lesser-known cable channels debut their own original programing, and this year Hulu is jumping into that game with three original shows and seven exclusives.

Perhaps the most recognizable of the bunch is a new show by cult filmmaker Kevin Smith called Spoilers, which kicks off June. The show will be a mix of group chats featuring Smith (who has made a side career of spewing hot air) and his entourage talking about film as well as some animated shorts. And despite the likely low-budget cost of doing the show, it looks like Hulu has only ordered a 10-episode trial run of the series.

The other two series — unscripted travel show Up to Speed from acclaimed director Richard Linklater (Dazed and Confused, Slackers) and self-described “bro-mantic” basketball comedy We Got Next from Kenya Barris and Danny Leiner — won’t debut until August, according to Hulu. (List and descriptions of Hulu’s original shows included below.)

Smith’s show brings Hulu’s original programming lineup to eight total, with another five said to be announced before the end of the year.

With increased competition coming from both Netflix and Amazon on the original programing front, Hulu wants to be more than just a destination that airs popular content from the big broadcast networks (ABC, NBC, Fox, CW, and the cable giant Viacom). Chief executive Jason Kilar has previously stated that the company will spend about $500 million on content for 2012, and a portion of that will go toward these new original shows.

Here are Hulu’s seven exclusive shows, which will kick off June 3:

The Yard – A mockumentary miniseries that originally aired on HBO Canada, “The Yard” offers a bizarre juxtaposition of two rival cliques of elementary school children, where tension develops much like the quintessential crime-family thriller. The show has comically been referred to by Canadian television critics as “‘The Wire’ and ‘The Sopranos’ with kids.” Premieres: June 7, 2012, entire series available July 12.

Derren Brown: Inside Your Mind – Derren Brown is a performer like none other in the world. He uses psychology, magic, showmanship and suggestion to achieve things that for anyone else would be impossible. In the U.K., he is multi-award winning performer and has done a variety of huge and baffling stunts including predicting the national lottery and playing Russian roulette on live TV. New episodes premiere every Saturday beginning on July 7; Entire series available on July 28

The Booth at the End (Season Two) – Xander Berkeley, best known for his roles as “George Mason” in FOX’s “24” and “Percy” in The CW’s “Nikita,” stars as an enigmatic man occupying the corner booth of a diner. He possesses the power to grant desires, contingent upon recipients performing mysterious tasks. This half-hour psychological thriller begs the question: “How far would you go to get what you want?” Directed by Adam Arkin (“Justified,” “Grey’s Anatomy”), season two premieres on Hulu and Hulu Plus in July. Five (5) episodes.

Pramface – Jamie and Laura are two young, free and single teenagers who, after hooking up at a party, soon find they have a very big complication on their hands. Laura is pregnant. So even though they barely know each other, they now have one thing in common – and it’s getting bigger. “Pramface” brings humor and heart to a tricky subject, following these two unexpected parents-to-be as they try, and frequently fail, to negotiate family, sex and what happens once nine months is up… The series premieres on Hulu and Hulu Plus on July 19th from BBC Worldwide Americas Digital Distribution. Six (6) episodes. New episodes premiere every Thursday beginning on July 19; Entire series available on August 23

The Promise – The serial drama examines the origins of the Middle East conflict in events that took place under British rule sixty years ago. The bold and honest series cuts between the life of Erin, an 18-year old Londoner in present day Israel and Gaza, and that of her military grandfather who was part of the British peace-keeping force in Palestine at the end of the second World War. The series premieres on Hulu and Hulu Plus on August 11th. Four (4) episodes.

Little Mosque – Little Mosque is a light-hearted and comedic fish-out-of-water tale about a small Muslim community that rents the parish hall of a small town church to use as a mosque. It will premiere on Hulu and Hulu Plus this summer. 91 episodes.