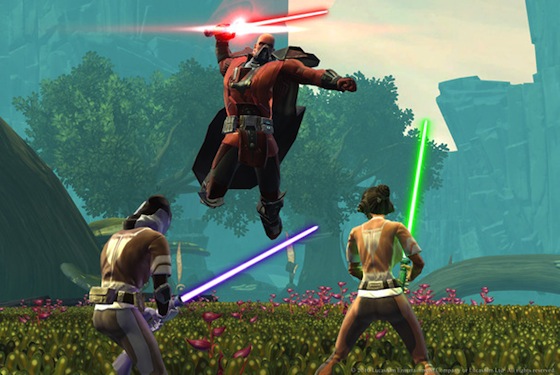 BioWare Austin, a division of Electronic Arts (EA), is cutting staff. This comes after less-than-stellar performance of Star Wars: The Old Republic (SWTOR). Despite a strong start, the game has seen a considerable drop in subscriptions.

During a quarterly earnings report in early May, publisher EA announced that the game had lost 400,000 subscribers since February, when they had 1.7 million online players.

We also learned in January that the game took a massive sales drop in the U.K. This didn’t bode well for the game.

Hey folks, since you’re reading this you may likely have heard that we’ve done some restructuring here on the SWTOR team. Sadly, we are bidding farewell to some talented, passionate and exceptionally hard-working people who helped make SWTOR a reality. Impacting people’s lives this way is always very hard, but we’re ensuring the affected people are treated with dignity, fairness and respect.

Looking back at launch, we all came together and did something historic. We executed one of the largest, most successful and stable launches of any MMO yet in industry history. That is not an easy feat for any development team or company and we are humbled and honored by our fan community’s strong support both at launch and beyond.

Looking forward, the studio remains vibrant and passionate about our many upcoming initiatives for Star Wars: The Old Republic. We still have a very substantial development team working on supporting and growing the game, and we feel we are in a strong position, with your continued involvement and feedback, to continue to build Star Wars: The Old Republic as one of the most compelling and successful online experiences in the world today. There are many strong initiatives planned for cool new content and new features that we’re excited to tell you about in the upcoming weeks and months.

Rest assured that we remain dedicated to delivering a high quality service in SWTOR to you, our fans, and we will continue to support and grow Star Wars: The Old Republic over the weeks, months and years to come.

Thanks,
Greg and Ray

A representative from EA offered this comment as well:

BioWare has restructured its studio in Austin today.  Of the employees impacted, some will be able to join other projects within EA, others will leave the company. These are very difficult decisions, but it allows us to focus our staff to maintain and grow Star Wars: The Old Republic.

BioWare Austin remains a large and important part of BioWare and EA, working with other studios around the world to continue to deliver a high-quality service and exciting new content for Star Wars: The Old Republic.