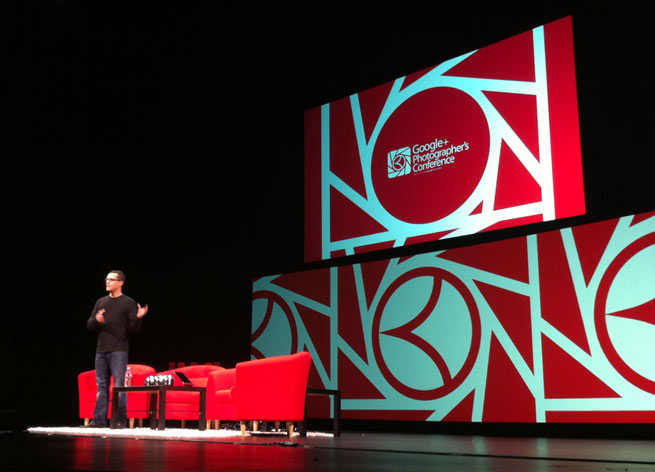 Google+ is succeeding in small bursts, feature by feature. As a social network competing with Facebook it’s a flop, but its video-chat tool Hangouts is a winner. Now photo sharing is poised to be the service’s next breakout hit, thanks to an enthusiastic community of photographers who like the focus on attractive full-size images, Google+’s new photo-centric iPhone app, and a uniquely Google passion for metadata.

In fact, Google+ is pushing hard on the photography front and is in a great position to dominate the floundering Flickr.

The Google+ team teamed up with Kelby Training for a two-day Google+ Photographers Conference in San Francisco, or as it was adorably called, a HIRL — Hangout in Real Life. Vice president of product for Google+ Bradley Horowitz (pictured above), who led Yahoo’s purchase of Flickr in 2005, kicked off the event Tuesday by talking about the future of photography, how Flickr changed his outlook, and whether ads will ever make an appearance in Google+.

A camera that records your blood pressure

“I feel photos are the lifeblood of our service,” said Horowitz. “They are the way we can most immediately and viscerally connect as human beings.”

For the past four-plus years, Horowitz has pushed his passion for “social computing” at Google: combining photos, algorithms, and human interaction. While some of us may see the rising flood of images and data — from camera settings to GPS location — as overwhelming, Horowitz sees it as an opportunity. He thinks the future lies in capturing even more data, sharing more information, having more sensors, and recording more dimensions.

For example, we generate so much information that going through it to find gems is becoming more and more difficult. Ironically, even more data can be used to bring order to overload.

“I want to know everything I can about the environment,” said Horowitz. “I would like to know more detailed information about the roll, pitch, yaw of the camera. About the lens optics, about even the blood pressure of person whose hand is on the camera, even the galvanic skin response.” These biological markers can be used to identify the special and meaningful moments in your life worth remembering, such as the happiness you felt seeing your kid take her first steps.

Tools like Google’s own Google Glass could be a great start for capturing all of this information, but of course there are a few kinks to be worked out first.

“I never know whether Vic is listening to me or not,” said Horowitz of Google’s Vic Gundotra, who sometimes sports the augmented reality glasses during meetings.

We are capable of so much more than Instagram

Capturing pixels is just the beginning of a photo. How it’s processed and used after it’s on a computer is becoming even more important. Google has multiple properties that dabble in photos, including Picasa, Google+, Drive, and even email. The next step is to combine those tools together, something Horowitz admits is still an issue.

“Ultimately the brand distinction between those needs to go away… we’re working hard to erase the seams between these experiences,” said Horowitz in response to a question about the difference between Picasa and Google+. “The fact that you have to ask it is a failing on our part.”

Eventually Google aims to blur the line between the device and the cloud, so all the data you generate is automatically backed up, archived, and secured in a nice non-obtrusive manner. Automating this synthesizing stage would free up time for photographers to focus on the more enjoyable process of manipulating the data.

Horowitz wants to increase the power its own post-processing tools, making image editors scalable so that an amateur can use them as easily as a professional photographer. Replacing the very segmented image editing market and creating a tool that is equal parts Instagram, Lightroom, and Photoshop is an especially ambitious (perhaps naive) idea.

Google wants you to think of ads as little presents

The absence of ads in Google+’s lightbox, the tool that shows your images, is part of what appeals to the many photographers who use the service. But certainly it’s only a beta perk, right? After all, a whopping 96 percent of Google’s revenue comes from advertising. Google’s philosophy when it comes to ads is that they can be a very useful part of the user experience (as they are in search results). However, it doesn’t want to serve them where or when they don’t belong and won’t be the most effective.

“We don’t think of ads as punishments the users must endure, we think of ads done well as something that users would cry over if we took them away,” Horowitz said.

The company has not yet found a way to make ads useful in the lightbox. If a Google+ user is looking at photos of their family, says Horowitz, “the last thing you want to do is stick an ad between that intimate moment and intimate interaction.” Instead, Google leans more towards collecting data and delivering it when the context and time are right.

For example, say you review a restaurant. Google will tuck that information away and deliver it when it is relevant, perhaps six months later when one of your friends looks for a restaurant recommendation in the same area. “That’s a gift from me to that person facilitated by Google.”

Horowitz has a background in photography, like many others on the Google+ team (“We are geeks, and photographer geeks are a sub-flavor of geeks.”) As a grad student, Horowitz worked on some of the earliest image-processing programs and algorithms that analyzed images.

Eventually he landed at Yahoo as the head of multimedia search, which is where he met the founders of Flickr, a “fascinating, tiny little company in Canada.” They asked why, instead of writing complex algorithms to analyze images, he didn’t just ask people to volunteer their knowledge, à la Flickr’s tagging? People can just look at an image and say if it’s a dog, a person, or even if its funny or snarky.

“I realized my algorithms were so far from having a snarky detector that this was a better approach,” said Horowitz. “A little bit of social engineering was better than all the algorithmic approach… it introduced the concept of bringing people and community into the equation.”

Horowitz went on to oversee Yahoo’s acquisition of Flickr, and eventually moved on from the company. But now, many years later, the idea of social computing that Flickr planted in his head is being used to turn Google+ into real Flickr competitor.