It’s the ultimate floppy disk, with the ultimate information density. Bioengineers at Stanford University have discovered a way to encode, erase, and rewrite data within the strands of life itself: DNA. 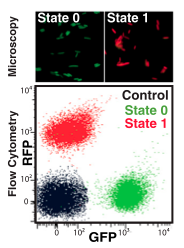 Researchers have previously been able to write data in DNA, but only once. Once written, the information was read-only. Now researchers are able to write and rewrite data. They’ve only done one bit at a time, but that’s an essential component of computation, and an important step forward in the potential creation of a biological computer.

“Now we can bring logic and computation inside a cell itself,” Jerome Bonnet, one of the scientists behind the innovation, said in a statement to Science News.

In early tests, the scientists essentially created a traffic light out of an Escherichia coli bacterium. The goal was to flip a sequence of its DNA back and forth: a way of storing information comparable to storing a zero or a one in a conventional computing bit of data. They choose a segment of the bacterium’s DNA that impacts color, so they could visually determine the experiment’s success or failure. Then, by flipping a small sequence of its DNA, they caused the bacterium’s cells to fluoresce in green. Switching it back, they caused it to shine red: visual proof that they were both rewriting DNA and storing information.

DNA has long been known to be an almost unbelievably efficient information storage medium. With 3.2 million base pairs in a strand of 20-25,000 genes, your DNA stores 800 gigabytes of data in a literally microscopic amount of space. Compare that with 50 gigabytes for your average Blu-Ray disc, or perhaps a terabyte for the hard disk in your computer — neither of which are microscopic — and you can see the appeal of learning to read and write DNA.

The scientists are calling it RAD, Recombinant Addressable Data, and have successfully saved data even during cell reproduction. The abstract of the paper detailing the innovation states: “Our core RAD memory element is capable of passive information storage … for over 100 cell divisions.” 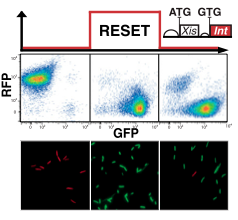 Even more importantly, the data can be re-written multiple times with no performance or integrity degradation. That’s critical for their long-term objectives: “extending computing and control methods to the study and engineering of many biological systems.”

While it’s unlikely that you’ll see numbers representing gigabytes of RAD data on your next computer purchase alongside RAM and ROM, future uses include potential monitoring and treatment of cancer. That’s something to get even more excited about than a multi-gigabyte RAD array.