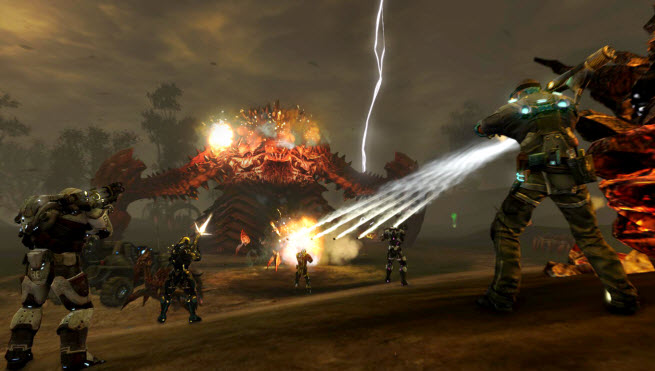 Trion Worlds’ Defiance is one of the most ambitious transmedia projects, a story that stretches across multiple media, ever made. Debuting in April 2013, the online game world is being jointly developed in tandem with a science fiction TV show created by the SyFy entertainment network. We recently got a hands-on preview of the game where the creators described the depth of the story for the first time.

Trion is one of the most well-financed startups in gaming history, with one massively multiplayer online game world launched and several more in development. The company recently raised $85 million in equity financing and it has launched a third-party publishing platform for other MMOs. 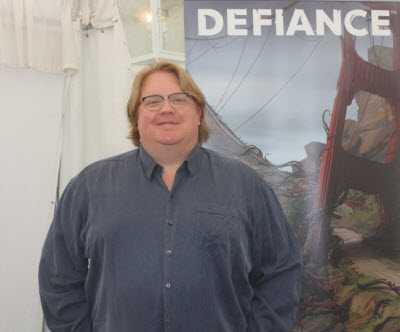 The TV show and game are so intertwined that they share common characters who move from one media to the other. As an example, the main characters of the Defiance game cause some havoc in the futuristic city of San Francisco and they have to hightail it out of town. The TV series’ opening pilot shows the pair arriving in the remade city of St. Louis, where there is an uneasy truce between alien and human settlements.

“I cannot express how excited we are after about four years of talking about the concept and developing an amazing game to be able to show it today,” said Lars Buttler, chief executive of Redwood City, Calif.-based Trion Worlds, at an event in Santa Monica, Calif. “What excites me is that it is not another sequel of a packaged-goods game. It is a revolutionary project.”

He added, “It’s a triple-A MMO shooter for the console and PC and a premium online game, a live world, and an epic TV show. In a world where people get excited about cow clickers and the fifth game in a series, Trion and SyFy are doing something that has never been done before.”

Dave Howe, president of the SyFy entertainment network, said, “We have been a top cable network for 15 years, and this is the biggest and most exciting project I have ever been involved in.” Here’s a link to the making of Defiance trailer.

The story of the game is epic. Seven alien races arrive on Earth because their own planet has been destroyed. Those aliens don’t get along, but their peaceful move to Earth turns hostile after a terrorist act. The attack destroys the alien “Ark” ships, which carry “terraforming” technology that is loosed upon the world. The terraforming technology destroys much of the human civilization, and a war ensues.

After decades of war, an uneasy piece ensues because two commanders — one human, one alien — defy their orders in order to prevent huge civilian deaths. As the story begins, humans and aliens live side by side in small towns on a terraformed Earth. The citizens seek to find and trade items of value, such as alien artifacts from the mother ship, dubbed the Ark.

The game combines a third-person action shooter with the persistence and scale of a massively multiplayer online game. Like Trion’s other game, Rift, Defiance will enable dynamic events, where the fabric of the game’s landscape can change during special events, such as an alien invasion of the human territory.

While the TV show is set in St. Louis, where the only recognizable structure is the famous arch, the game is set in San Francisco. The events in one town can affect what happens in the other. The story of the show and the game will influence each other and evolve over time. The artifacts, vehicles, weapons, fauna, and animal species are the same across the two media.

“The game and the TV show constantly reinforce each other,” said Mark Stern, president of content for SyFy. “It is a high stakes story of courage and survival, a sweeping action-adventure with intimacy and a character drama with heart.”

The SyFy network has recruited some big stars to be in the show, including Grant Bowler (Ugly Betty, True Blood); Julie Benz (Buffy the Vampire Slayer, Angel); and Jaime Murray (Dexter, Spartacus).

Like in other MMOs, you can create your own custom character, dubbed an Ark Hunter because you hunt after artifacts from the Ark. You can interact with thousands of people at t he same time and level up as you fight enemies and earn rewards. You can get a bunch of weapons, armor, and special abilities over time. And you can go on missions, deal with emergencies such as surprise attacks, and explore the world.

As you arrive, your job is to establish law in a Wild West frontier town with different factions of humans and aliens. In the town, there is a new gold rush as prospectors seek the energy of the Ark. Both human architecture and alien designs exists side by side.

I was able to grab an all-terrain vehicle and drive around in the Marin Headlands, north of the Golden Gate Bridge. The game was still in an early state as I could collide with another ATV without getting damaged. I stopped at one point and began shooting a bunch of monster crabs that came charging at me in waves. Then I saw a directional icon on the screen that signified a dynamic event. I drove the ATV over there and saw a bunch of humans attacking a gigantic alien monster. We had to shoot the thing’s underarms until its arms fell off and then vanquish it for good. It was a high-adrenaline game, but it wasn’t a particularly riveting or emotional battle.

“We wanted to wait until we had something meaty to play,” said Nick Beliaeff (pictured above), head of development at Trion. “We’ve focused on having something fun to play and a good show to watch without compromising the quality of the other.”

The world of San Francisco is huge in its own right, and the game will expand to include other regions of the San Francisco Bay Area over time. If all goes as planned, the story will never end. Stern said shooting has begun for the two-hour TV pilot and “it is really coming together.” The team has worked on shows or movies such as Battlestar Galactica, Pirates of the Caribbean, and Sin city.

Check out our video interview with Nick Beliaeff of Trion below and our screenshot gallery.

The third-person shooter Defiance will debut on the PC, Xbox 360, and PlayStation 3 in April 2013.