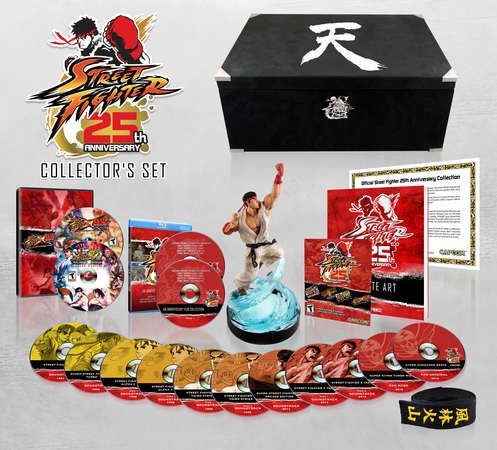 It’s a bit overwhelming to think that Ryu launched his first Hadoken 25 years ago, when Capcom’s beloved fighting-game series Street Fighter debuted in arcades. The developer certainly should be proud of such a remarkable milestone, and it looks to celebrate with an equally remarkable anniversary package.

The Street Fighter 25th Anniversary Collection Set is simply massive with an incredible amount of content: Buyers get the four most recent titles in the series (Street Fighter X Tekken, Super Street Fighter IV: Arcade Edition, Super Street Fighter II Turbo HD Remix, and Street Fighter III: Third Strike Online Edition), along with all of the accompanying downloadable content; a two-disc Blu-ray collection featuring the animated TV series, the animated movies, and a documentary highlighting the impact fans have had on the franchise; an 11-disc soundtrack spanning the entire series; a hardcover art book; an 8-inch statue of series star Ryu with a light-up base; a full-size replica of Ryu’s belt; and a certificate of authenticity for the avid collectors.

Those interested should be looking to save up $149.99, a rather affordable price considering all of the goodies listed.

Capcom is also looking to promote international Street Fighter tournaments for all of the games in the Collector’s Box. These will be starting in July and will run until the end of the year. The company is offering substantial prizes for contestants — about $500,000 worth — so competitive players who are satisfied with the games they already own have something to be excited for as well.

Seeing events and packages for such excellent franchises really shows the love that both developers and gamers have for the medium. Whether it’s a compilation of classic titles, as Nintendo did for Mario’s-25th anniversary, or full-blown international events, such as the Legend of Zelda symphony orchestra tour, these milestones stand as reminders of what made these much-lauded games so great. Unless of course you’re Metroid; then you’re simply ignored.