Unlike Yahoo, AOL’s activist shareholders won’t be able to boot out the company’s CEO due to false information on a resume.

Instead, Starboard Value LP, which owns 5.3 percent of AOL, decided to create a 96-page presentation outlining all of the missteps the company is currently making in regards to its media business.

Similar to what it has done in the past, Starboard highlights that AOL spent about $668 million on acquisitions since 2009 for the purpose of boosting its display advertising business. These acquisitions include the $315 million purchase of the Huffington Post, which generated about $30 million in revenue with a staff of about a hundred in 2009. HuffPo revenue is currently up, but so are its expenses. Starboard isn’t necessarily calling the Huffington Post a bad investment, but it does accuse AOL of mismanaging the property so that it became woefully unprofitable. (See table below.) 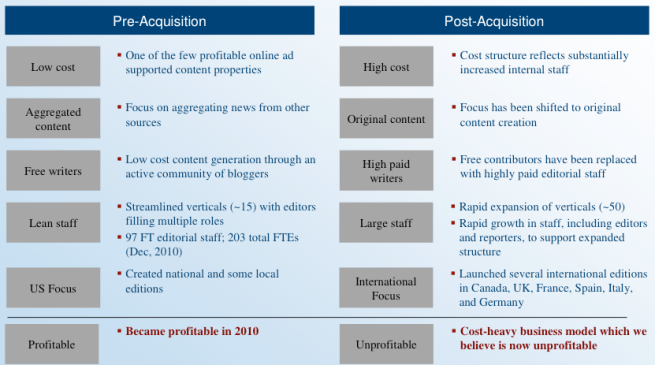 The most damning point in the report relates to AOL’s focus on turning its hyper-local news property Patch into a profitable business. Patch is returning $13 million in revenue this year (a number Starboard is convinced is padded), after AOL spent over $160 million. Based on interviews Starboard commissioned, the majority (70 percent) of advertisers admitted they didn’t renew their ad deals with the service after the first contract ended.

Starboard estimates that AOL’s overall display ad business is losing about $500 million per year and has already lost $1.3 billion cumulatively.

So, what do the activist investors propose should happen to change all of this?

Well, for starters, Starboard wants to replace three directors on AOL’s board so that the board will better represent the interests of shareholders. It also wants to kill Patch immediately. I imagine it would probably consolidate the number of properties AOL currently owns to only those that can be profitable on their own, without the help of pushing ad campaigns from other more successful properties.

One other thunderous slap to the face: Starboard wants to change the compensation of its executive team to mirror that of a media company — not a tech company. This makes perfect sense, especially since AOL recently laid off a large swath of employees in its email and instant messaging communications department. It also sold a very valuable chunk of technology patents to Microsoft. Starboard points out that AOL’s current board is allowing the company to compare itself to the likes of Apple, Microsoft, and Google.

You can check out the full hulking 96-page presentation via the SEC. Let us know your thoughts in the comment section.