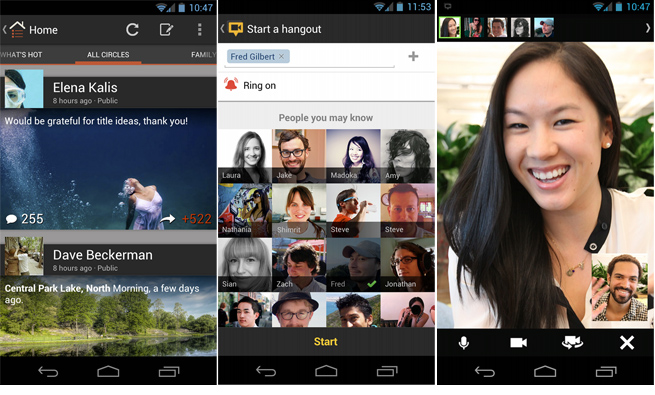 Google has updated its Google+ app for Android with beautiful new flourishes and the ability to start a video chat Hangout on the go, the company announced today.

The app update makes a lot of sense in light of Google+’s new photo-centric iPhone app and the service’s focus on wanting to be the next Flickr. Google clearly knows it can’t win directly competing against Facebook on status updates so it will try to get people to use Google+ for other things, namely video chat Hangouts and photo-sharing.

My favorite feature of the bunch is Hangouts and that feature has been nicely updated today by letting you start hangouts directly from your phone. Before, you could attend Hangouts in progress but could not create new ones from your phone. To try it out, tap “Hangout” in the navigation ribbon, add a few folks, and tap “Start.”

As for the layout, there is now full-screen media in your river, conversations that fade in, and the ability to +1 content instantly.

• A navigation ribbon that slides in and out, providing quick access to everything
• The ability to download photos directly from Google+, and turn them into wallpaper
• The chance to edit posts inline, in case you make any mistakes while on the go

The new app can be downloaded now from the Google Play store.