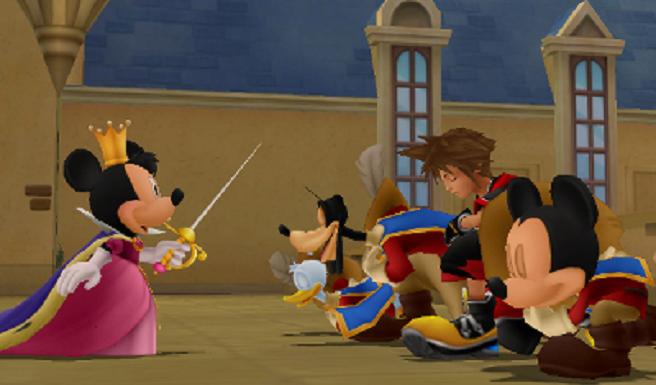 I almost find it hard to believe that Kingdom Hearts 3D: Dream Drop Distance is the seventh entry in the franchise. Part of this is probably due to the fact that fans are still waiting for a real sequel in Kingdom Hearts 3, and the recent spinoffs have featured tons of new characters that have alienated me from the series that I remember. I must admit: I’ve fallen a little behind.

Thankfully, this time around, developer/publisher Square Enix is putting together a solid, traditional experience that focuses on some familiar faces and doesn’t involve confusing fractions (KH: 358/2 Days, I’m looking at you). It even takes advantage of some of the 3DS’s unique features. From what I saw at a recent preview event in Santa Monica Calif., KH3D looks like a good point for casual fans who’ve slept on the recent KH games to hop back into the series.

The story takes place after the events of the Kingdom Hearts: Re:coded (Nintendo DS) as heroes Sora and Riku learn that their combined strength isn’t enough to fight off a mysterious, impending threat. KH3D chronicles their quest to beef up and pass the Mark of Mastery exam to prove they can responsibly swing around their Keyblades.

For those of you like myself who might have missed out on a couple of installments, never fear. “Story-wise, there’s moments where the game helps recap what happened in previous titles,” said Raio Mitsuno, product manager for Square Enix. “By the end, you’ll be able to read a summary of each of the past Kingdom Hearts games, and you’ll know how it got to this point.” (Mickey Mouse, however, doesn’t seem to be aware of these recaps. He, along with Donald Duck and Goofy, doesn’t appear to remember his history with Sora in the section of the demo that I played.) 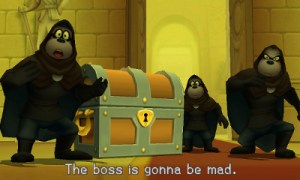 Combat in KH3D is fun and easy to jump into; the controls are pretty standard as far as third-person action games go. I did, however, have some difficulty landing one of Sora’s flying spin attacks. I frequently missed my targets and would get disoriented on the battlefield. Other times, the action would get a bit too hectic on the screen for me to figure out what was going on. The game will support the Circle Pad Pro accessory, with the extra nub for steering the camera. Hopefully that will help straighten things out. (It wasn’t available when I played.)

For more robust fighting, Sora and Riku have these quirky turquoise and purple critters called Spirits that tag along for the ride. The player can collect and train these eccentric animal creatures to make combination attacks, to provide field support, and even to teach new moves to the heroes. When I tapped on a little round Spirit’s icon on the touch screen, he put Sora on his back and did a stomach-bounce assault. Cute. But why do these Pokémon stunt doubles fill out the party instead of Mickey and friends?

“This story is designed around Riku and Sora becoming true Keyblade masters,” said Mitsuno, “and it’s a journey they have to take on their own. It doesn’t really work if Donald and Goofy are helping.” Fair enough. These little buggers can come in handy for gameplay purposes but aren’t really nuanced enough to add to or detract from the main narrative. To make them a little more endearing, though, KH3D lets players bring the Spirits into the “real world” using the augmented-reality feature on the 3DS. 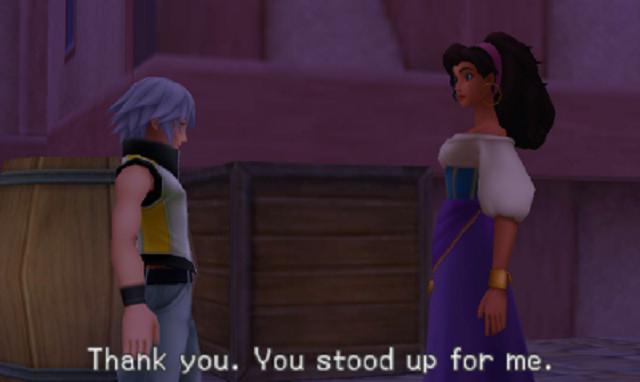 Visually, this game is one of the most impressive I’ve seen on Nintendo’s portable console. The 3D effect really complements the series’ cartoon aesthetics and gives the levels a greater sense of depth.

Square Enix is taking Kingdom Hearts 3D: Dream Drop Distance pretty seriously in terms of production quality. This isn’t a dumbed-down handheld experience by any means and looks to be one of the more significant third-party releases of the summer.