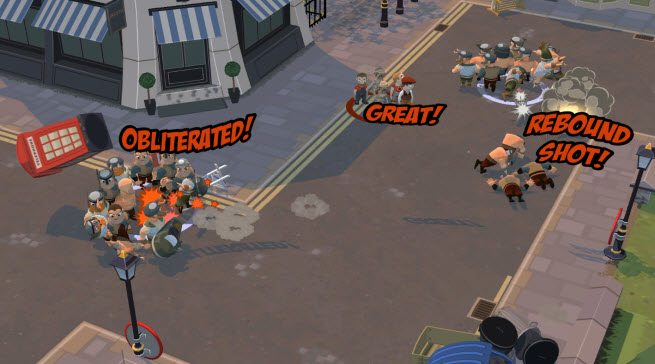 Sony is unveiling a goofy PlayStation 3 and Vita game dubbed When Vikings Attack; at a recent Sony event in Santa Monica, Calif., I got a close-up, hands-on preview. In the game, you control a pack of town citizens who must defend their neighborhood against hordes of those invading Norse pirates.

You move these groups from an isometric viewpoint and pick up items on the terrain. You can, for instance, direct your little mob of citizens to pick up a car and heave it at the vikings in order to take them out, which feels like you’re bowling to get a strike by knocking all of the vikings down in one fell swoop. But the Norsemen move around and pick up things, too, and they dish it right back at you.

You can dodge their attacks. Sometimes, they just pick off a few of your people. If you lose too many citizens, the game gets harder because the only items you’re able to pick up, such as mailboxes, become smaller and deal less damage. But all isn’t lost. You can pick up wandering citizens and bring them into your mob. You can also find power-ups such as a green missile, which will convert your enemies’ allegiances to that of your town.

It’s a cute game with a tight focus on a small patch of a suburban neighborhood. Neil McPhillips, associate producer, said in an interview with GamesBeat that up to four players can compete in versus mode, where everyone tries to take one another out. Or you can play cooperatively, trying to knock out the invading Norsemen. As you defeat the vikings, you level up and move on to a new scene. You can find more weapons to toss at your rival players, too. But you have to be careful since they can catch a projectile with a deft button press and toss it back at you.

Neil McPhillips also said that When Vikings Attack supports cross-platform battles between players on PlayStation Vitas and PlayStation 3s. You can compete against friends to get high scores.

“We call it a hectic arcade brawler,” McPhillips said.

The game, developed by Clever Beans, comes out in October, and it looks like a bunch of fun. Check out our gallery of screenshots below.