Metro Last Light, the sequel to the first-person shooter game Metro 2033, is coming out in 2013. Today, THQ released the first video trailer showing the story behind Last Light, and it’s quite well done.

In the trailer, an old man listening to a short-wave radio hears about the onset of nuclear war. He warns people to start moving to the Metro, or the underground subway, in Moscow. No one believes him until the emergency alarms go off. A woman who was singing to her baby runs toward the Metro entrance. Moscow’s own nuclear missiles launch into the air and a panic ensues.

The trailer is set in 2013, and it features an all-Russian cast. Not a word of English is spoken unless you count the prophet of doom screaming, “Armageddon! Armageddon!” But you can understand exactly what is happening. The woman with the baby shouts at a Russian officer guarding the entrance to the subway. She gives him her baby. He takes it, and heads underground. The doors close, and the nuclear bombs go off.

The original Metro 2033 debuted in the spring of 2010. It was based on the post-apocalyptic novel of the same name by Russian author Dmitry Glukhovsky, and it was made by 4A Games, a Russian developer that helped make the shooter Stalker: Shadows of Chernobyl. Metro 2033 features a ragtag group of survivors living underground in the Metro subways of Moscow. They go to the surface to scavenge for materials, but they face horrific mutated monsters that are only too happy to eat humans for a meal. 4A is also making Metro Last Light.

Last Light’s live-action video is really moving, and it establishes the origins and setting for the game quite clearly. It’s an example of video game marketing at its best since it aims to hook the player emotionally into the title’s fiction.

The video closes with a soldier wearing a gas mask and then switches into game art, showing the mass destruction in Moscow 20 years after the attack. Nothing stands except the shells of stone buildings and the facade of the Metro, where survivors live underground. The trailer closes by revealing that the game is coming in 2013, assuming, of course, that the world doesn’t come to an end first. 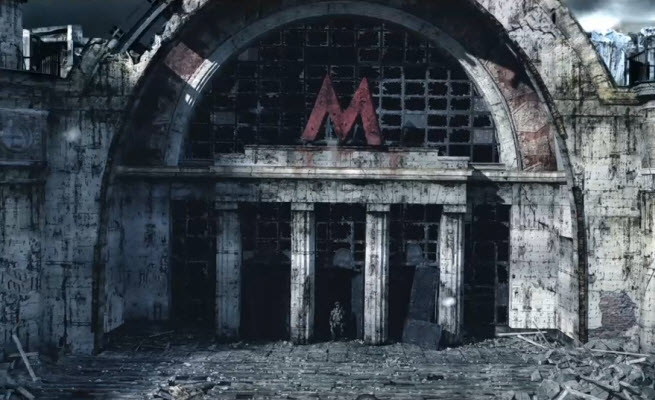