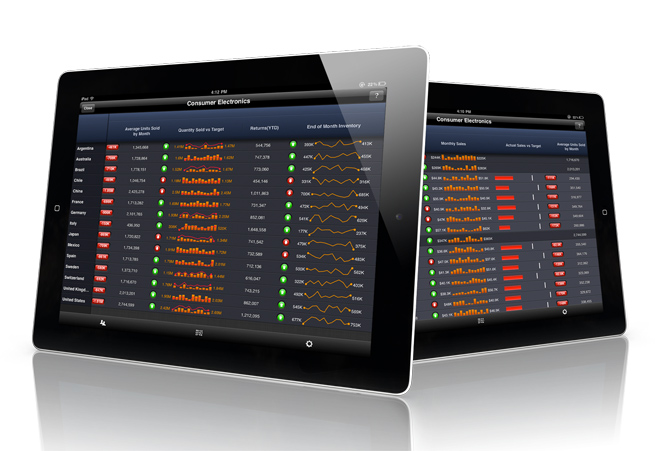 If there is one application that personifies how Apple’s mega-popular iPad is transforming the enterprise, it could very well be the intuitive, luscious, and just-plain-cool Roambi, a business intelligence app that brings mundane data to life in unimaginable ways.

Roambi, which has attracted $30 million in funding from Sequoia Capital, lets you show your company’s SAP, Oracle, or Salesforce data on the iPad in bright charts and graphs. Each report is available for online or offline viewing, so you can always bust out your iPad for presentations or routine queries.

And unlike business intelligence players with iPad app support like MicroStrategy, IBM Cognos, or SAP BusinessObjects, Roambi does not tie you down to a single data source. “Roambi is unique because it is designed to aggregate across different data warehouses,” Forrester mobility analyst Ted Schadler told VentureBeat. “They pull it all into a single data dashboard for an executive.”

Roambi comes from San Diego-based development firm MeLLmo. The company’s founders originally picked the odd name to throw off the competition, but they are stuck with it now because all their contracts use the name. They try to make the best of their funny name and in some ways they are affectionate toward it — in the office, the guys are “MeLLMen” and the ladies are “MeLLmettes.”

Roambi stems from the day MeLLmo chief executive Santiago Becerra (left) stood in line to get his hands on the first-generation iPhone in June 2007. A lifelong fan of Apple products, Becerra had the time to stand in line because he had sold a startup eight months prior and was taking a break from work. He deeply identified with the idea of the iPhone and loved the concept of using a flat touchscreen display for interacting with applications and the web.

“I remember that first day of playing with the iPhone and the pre-loaded apps like the stock widget,” Becerra told VentureBeat. “It was truly different because it required no instruction manual. At the time, I asked myself ‘How long before business people will want to see data on this device?'”

Becerra was so excited about the idea of enterprise applications for the iPhone that he called up and pitched a few friends and business colleagues on the idea. A few people shied away from the idea, but he found a solid founding team that believed in it, including Quinton Alsbury, David Becerra, and Jaime Zuluaga.

Alsbury, now MeLLmo’s president of product innovation, loved Becerra’s idea from the start. He wasn’t as immediately bullish as Becerra was, but he was excited about the iPhone’s potential.

“It seemed obvious to anyone looking at the phone — there was no way that it would be relegated to just a consumer device,” Alsbury told me. “Apple being a computer company meant that they had everything they needed to make it a computing platform. It seemed obvious that the evolution of the iPhone would make it into a computing device. Motion and visual graphics didn’t exist in this form before.”

So Becerra, Alsbury, and the others talked about the idea until they finally formed MeLLmo as a stealth LLC in January 2008. Their goal was to create a touch-based data visualization app exclusively for the iPhone. But as they were just getting started, the team knew they’d have to overcome a host of obstacles, including convincing people their idea was sound. The biggest problem they had was that no software development kit existed for iPhone apps. The App Store didn’t even exist yet to distribute those apps.

From the outset, the team made two bets: One, that business users would eventually prefer using iPhones over BlackBerrys. And two, Apple would soon offer a distribution model for other applications.

The MeLLmo team started recruiting on the sly that January. Alsbury said the company chose the slogan “Bringing social networking 3.0 to web 2.0” because, like the company name, it would not hint at what the company was building. Many developers and business folks saw the slogan and contacted the company about job opportunities. When the prospective employees came in, the team revealed they were actually working on a business app for iPhone. Some of the earliest prospects jumped at the idea and still work for the company today.

The most critical early hire for the company was Alex Schaefer, a part-time developer who created the popular app ApolloIM, which ran on jailbroken iPhones. Jailbreaking your iPhone opens the door to installing unapproved applications and using the phone on other carriers. Early in the life of the iPhone, jailbreaking was especially popular because Apple didn’t yet offer the ability to install apps, and people understood that the iPhone could do much more than it was allowed to do. Schaefer’s ability to work around Apple’s limitations was important for MeLLmo, since the team wanted to build an app without an SDK.

“[Schaefer] in himself is an interesting story,” Alsbury said. “He wasn’t even a full-fledged developer. He was a poetry major with two years of computer science. But we needed someone to take some of these early ideas and see what was even possible. We needed someone who could jailbreak and start messing around. When we hired him, we gave him the title of ‘iPro.'”

So about month before Apple released its first iOS SDK on March 6, 2008, MeLLmo was already hard at work figuring out app development and how its data visualization app would function. Becerra describes the earliest months of development as “difficult” because there were no rules and no playbook for creating these apps. There were only a few apps for the iPhone at that point, so designing an interface with touchscreen functionality was tedious.

“It was really a new paradigm,” Becerra said. “To us, the hardest part was to forget about the past and center on a new platform and new ways of thinking.”

The company remained in stealth mode until May 19, 2009. Just before coming out, the team met with bloggers, journalists, and analysts to preview the product, which MeLLmo expected to sell directly to corporations. They were met with lots of skeptical looks and some “well-known bloggers” told then it wouldn’t work.

“They told us we wouldn’t be successful unless we were on BlackBerry,” Alsbury said. “They said ‘No enterprise is going to buy software institutionally for the iPhone.’ They didn’t believe anyone would buy iPhone software.”

When the company finally launched Roambi for iPhone, many businesses complimented the intuitiveness of the design and realized that touch-based data visualization could add some pizzazz to sales calls, presentations, and meetings. Those businesses weren’t exactly lining up to get their hands on Roambi at first, but the response was generally positive. In fact, business users were slowly ditching their BlackBerrys in favor of more powerful and versatile iPhones and starting to find ways to use it for work and play alike.

“We were surprised how fast companies were buying into it at the beginning,” Becerra said.

Page two: How the iPad changed everything and where the company is headed next